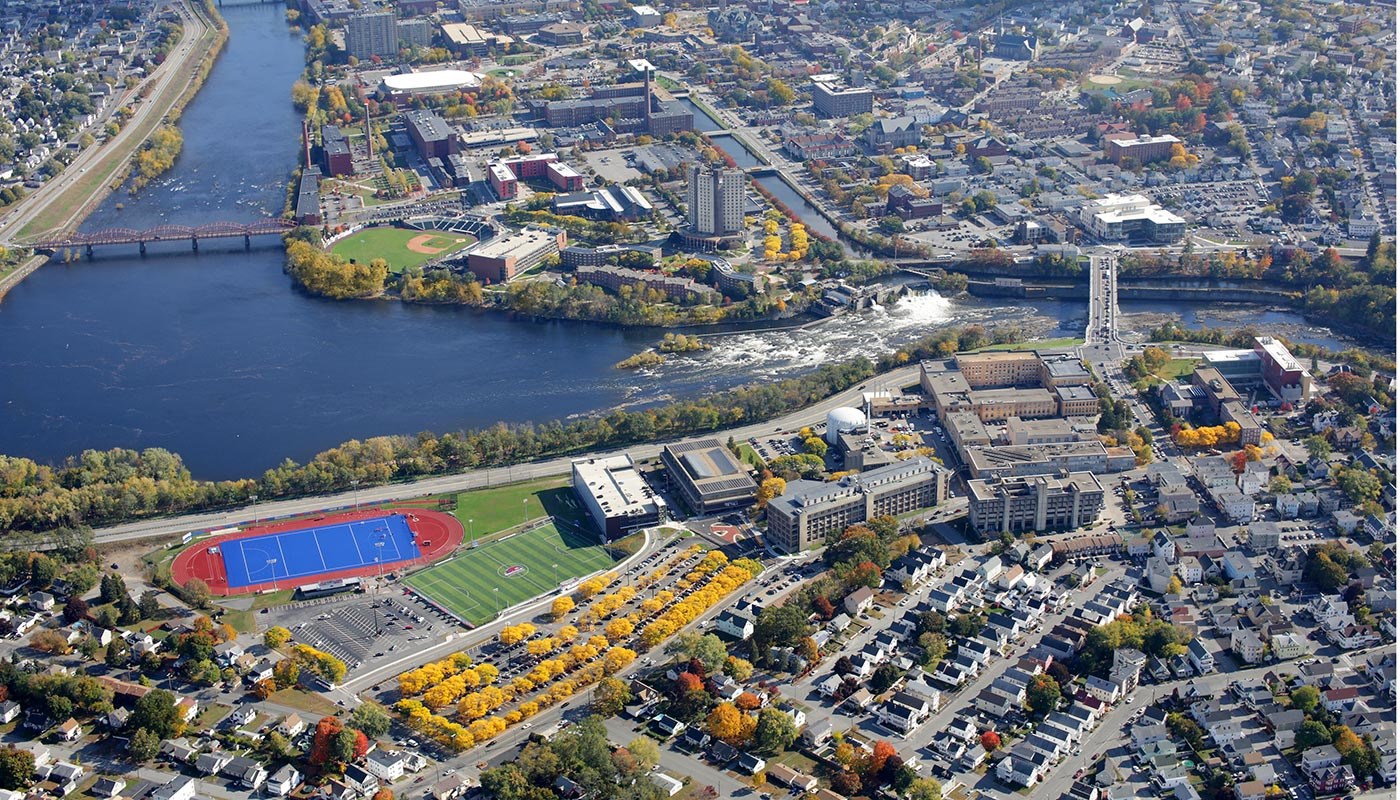 UMass Lowell runs two steam plants that provide heat and other services to two-thirds of the campus buildings. Fueled by oil and natural gas, these North and South Power Plants operate 24/7, together generating more than 160 million pounds of steam per year.

While the basic science of steam power has not changed much since the nineteenth century, the efficiency of steam generation and delivery is constantly evolving. The University continually takes advantage of emerging technology to maximize each plant’s output per unit of energy consumed. Read on to learn more about these power plants and their history.

The North Power Plant supplies steam to 14 buildings on North Campus. This steam, supplied at 120 psi, is used for heating, domestic hot water, labs, the Costello pool and summer de-humidification.

In 2010, the Bigelow boiler’s burner front was changed to accommodate either #6 fuel or gas, enabling the university to respond to varying fuel costs. Two new Cleaver Brookes fire tube boilers have also been purchased, along with economizers and a new Deairator and feed pump system to replace the 1950s boilers. The two new boilers will greatly improve the efficiency and dependability of the plant.

The South Campus Power Plant generates high pressure steam that is used for heating all twelve South Campus buildings in the winter and for steam absorption air conditioning of three large academic buildings during the summer.

Constructed in 1964, the plant was built to replace the original Lowell State College power plant from the early 1900s, which remains in the basement of Coburn Hall. The plant has three Babcock & Wilcox field-erected Sterling type cross set drum boilers rated to produce 15,000 pounds per hour of 100 psi saturated steam at 338°F, firing either natural gas or #6 heavy fuel oil. The boilers were originally fitted with B&W mechanical atomization oil guns and had steam turbine-powered forced draft fans with Hagan pneumatic combustion controls.

In 1989, all three boilers were retrofitted with more modern Coen brand single point positioning burner fronts, which eliminated the steam turbine fans, simplified the boiler operation and increased the boiler efficiency. In 2005, the analog based Coen combustion controls on boilers #2 and #3 were replaced with microprocessor-based digital metered controls that have further increased the plant efficiency.

Other improvements to the plant include the installation of new boiler feed pumps in 1999 and the 2006 replacement of the main condensate receiver with a new stainless steel 1,500 gallon unit that is fitted with 3 condensate pumps. In 2010, a modern, above-ground 25,000 gallon #6 fuel tank was installed adjacent to the plant. In case of emergency, this will provide the plant with enough oil to run continuously for five to six days without refueling.

In an average year, the plant generates 73 million pounds of steam equal to 88 billion BTUs of thermal energy while consuming 80 to 90 million cubic feet of natural gas.