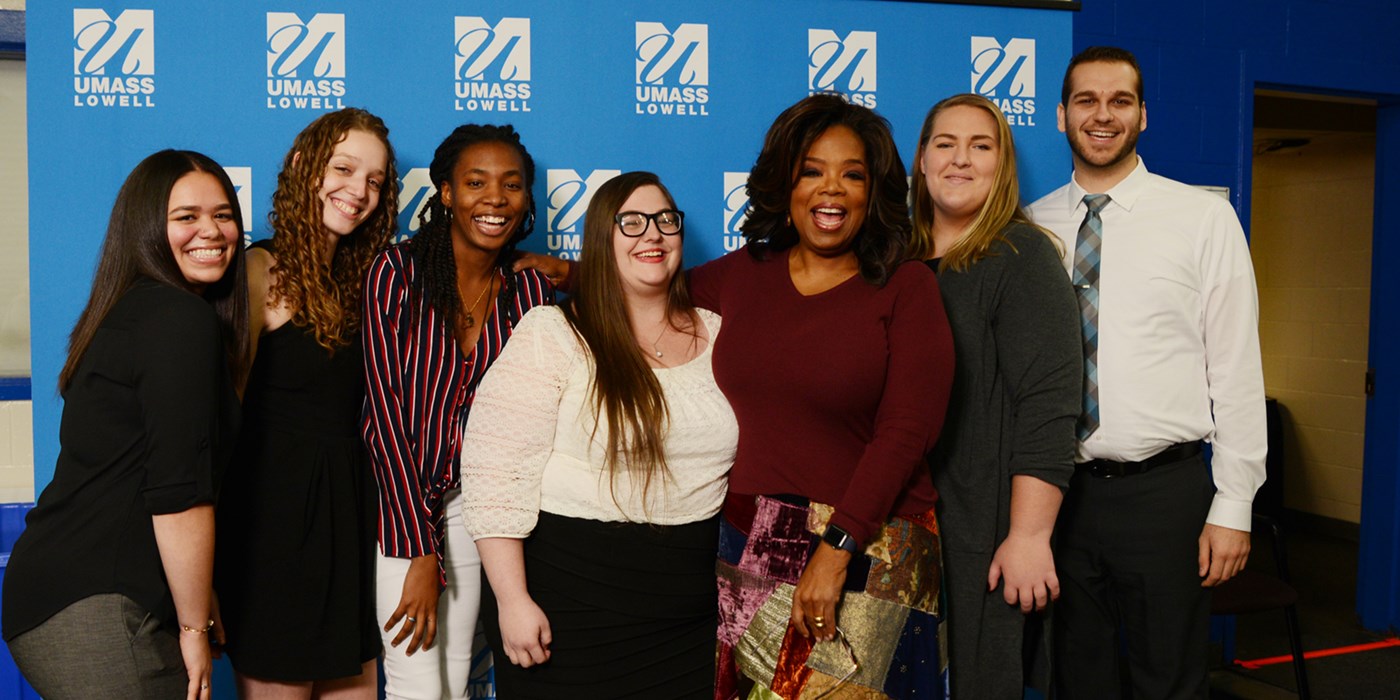 UMass Lowell is pleased to announce the inaugural group of Oprah Winfrey Scholars. While these students come from a variety of backgrounds, they share a common life circumstance: Each recipient bears the financial responsibility behind achieving their educational dreams squarely on their shoulders. Through their perseverance and determination, they are overcoming personal challenges to pursue their education – all while working part-time jobs as they work toward their goals.

Senior Nicholas Abourizk is an English major with a theatre arts concentration who is a first-generation college student from Methuen. He has been involved in several staged productions at UMass Lowell, most recently playing the title role in “Macbeth.” A leader in the theatre arts community, he works as a publicity and marketing intern and provides peer support to first-year students in their introductory seminar class. Abourizk also helps lead UMass Lowell’s SimPatient collaboration, in which theatre students act out patient scenarios to provide the university’s nursing students with these educational experiences. Abourizk, a biology minor, combines his love for this field and the theatre by also serving as an actor for the program himself. He looks forward to a future as a theatre artist and advocate.

Sophomore Coral Gonzalez Diana is a nursing major and psychology minor from Chelsea. A first-generation college student, she is a hard-working young woman who holds three jobs while studying full time. Gonzalez Diana combatted housing insecurity for a few years and has since found a home at UMass Lowell. In high school, she became a certified nursing assistant and has worked in local hospital emergency rooms since then. After graduating from UMass Lowell, she plans to become an emergency-trauma room nurse and continue her education to become a psychiatric nurse practitioner. Gonzalez Diana, who draws on her own experiences when caring for patients in need, believes nursing is the perfect career for her to improve the quality of people’s lives.

Ashlie Grasa, a junior from Cincinnati, Ohio, is a chemical engineering major. A first-generation college student, she combated homelessness for many years and moved several times before coming to Mass. to attend UMass Lowell. She works several jobs to support herself and looks forward to obtaining a professional co-op position in her field. Her goals include studying nuclear physics as a graduate student and one day working for the U.S. Department of Energy.

Junior Daphne Shakira Naut, who speaks several languages, is a double major in political science and philosophy with a double minor in German and Portuguese studies. When not working or in class, she is focused on her responsibilities in UMass Lowell’s Student Government Association, where she serves as the chairwoman of the Academic Affairs Committee and as a senator for the university’s College of Fine Arts, Humanities and Social Sciences. Her professional aspirations are to graduate from law school and advocate for others in social-justice matters, including human rights and immigration. Having experienced home and food insecurities throughout her life, she is also eager to assist individuals who face these issues as well. A native of New York City, she hopes to one day practice law either there or in Washington, D.C.

Flore Stécie Norcéide is a sophomore from Haiti who is majoring in electrical and computer engineering. She lives in Massachusetts without her immediate family, as they remain in the island country. Fluent in French, Haitian Creole, English and Spanish, Norcéide began her education at UMass Lowell  this summer as part of the university’s new RAMP (Research, Academics and Mentoring Pathways) to Success Program, which provides opportunities for women to advance in science, technology, engineering and mathematics (STEM) fields. This fall, she took a position as a research assistant in UMass Lowell’s Center for Advanced Computation and Telecommunications exploring her interests. After graduation, she plans to pursue a doctoral degree, become a professor and give back to her Haitian community.

Sophomore Jaime Waldron has a full academic plate: She is a double major in criminal justice and business administration with a concentration in accounting, and a double minor in political science and Arabic. When not working or in class, she is a Student Government Association senator, vice chairwoman of the events and public relations committee, the secretary and treasurer of the Residence Hall Association, a member of the Association for Campus Events and the chairwoman of the Donahue Hall Council. Waldron’s goal is to pursue a career in criminal justice, possibly as a forensic accountant.