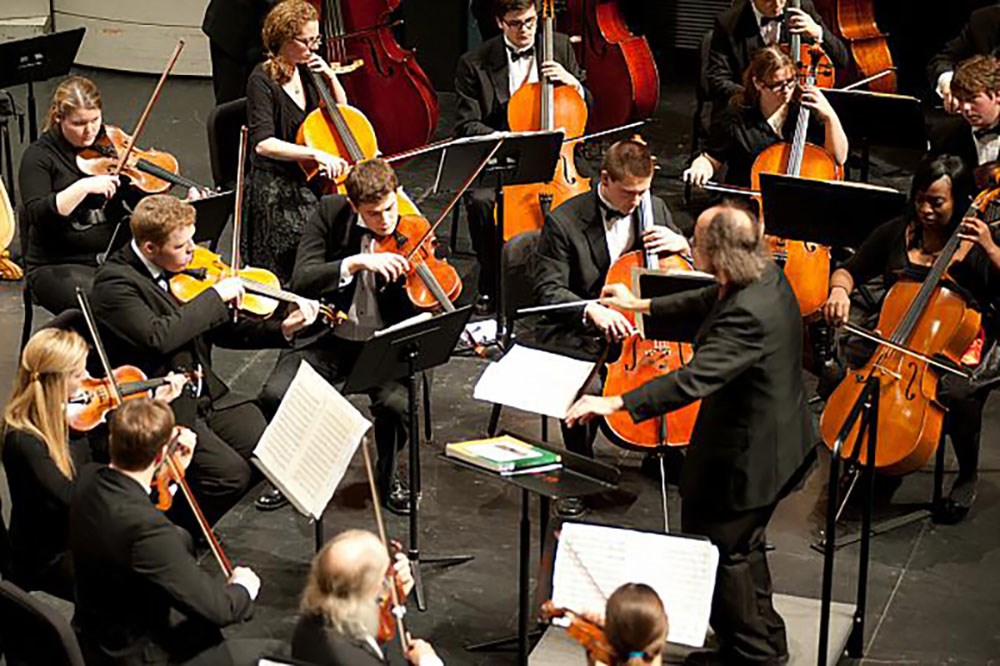 The Music Department offers many ensembles in just about every genre. Below is a list of our Contemporary Ensembles.

*Some of these ensembles offered on a rotating basis

The UMass Lowell Blues Ensemble performs several live shows per semester at a downtown, off-campus venue (Warp & Weft). This schedule gives students an opportunity to learn and perform music at a greatly accelerated rate while working on their stage comfort/presence and ensemble communication.

The Blues Ensemble explores a wide array of blues and blues-based musical traditions including fundamental forms and grooves, as well as common riffs and melodic structures. Particular focus is given to creating compelling, spontaneous performances through the use of improvisation, body language, audience interaction/participation, effective phrasing, musical communications and cueing.

Since it was formed in 2016, the Blues Ensemble has continued to increase the number of shows it gives each semester as well as their visibility in the community, and pre-pandemic the ensemble hosted open public jams. Members also performed at Boston's historic Faneuil Hall as well as locally at UnchARTed and Warp & Weft. In 2021 the ensemble was invited to perform the opening hour of the first outdoor summer show in Lowell at Kerouac Park (first since the shutdown!).

Open to all instrumentalists and vocalists by audition. Contact John Shirley by email: John_Shirley@uml.edu.

The Classic Album Ensembles transcribe, rehearse and perform one classic album in its entirety each semester. Past albums have included Pink Floyd's Dark Side of the Moon and Wish You Were Here, King Crimson's In the Court of the Crimson King and Red, and Steely Dan's The Royal Scam.  These ensembles are open to all students by audition.

The Metal Ensemble explores the wide array of metal-based musical styles from the early 1970's to the present day; their fundamental forms and grooves, as well as common riffs and melodic structures.  Open to instrumentalists and vocalists by audition.

The R&B Ensemble is designed to familiarize students with Rhythm and Blues music, from classic repertoire of the 1960's through the present, while preparing for a concert at the end of the semester. Students are guided through the process of putting a working band together and rehearsing repertoire for performance, including attention to authentic stylistic approaches.  The R&B Ensemble is open to all students by audition.

The Songwriting Ensemble is an exploration of creativity through songwriting and arranging, with students rehearsing and performing songs written by ensemble members. The class examines a variety of issues relative to writing and producing music, including individual and collaborative songwriting, arranging for a given ensemble, working with multiple styles and techniques, and studying commercial recordings with the approaches to songwriting, arranging and production techniques that these recordings exemplify. Contact Christopher Lee by email: Christopher_Lee@uml.edu for more information.

The Video Game Ensemble performs live music based on video games.  Project include student arrangements of game soundtracks for the ensemble (acoustic or electroacoustic), using in-game mechanics to develop a live performance and developing actual games to feature original sound and music. Live performance in concert is required for all participants.  Open to all music majors (vocalists and instrumentalists) by instructor's permission only. For more information contact Ramon Castillo via email at Ramon_Castillo@uml.edu.