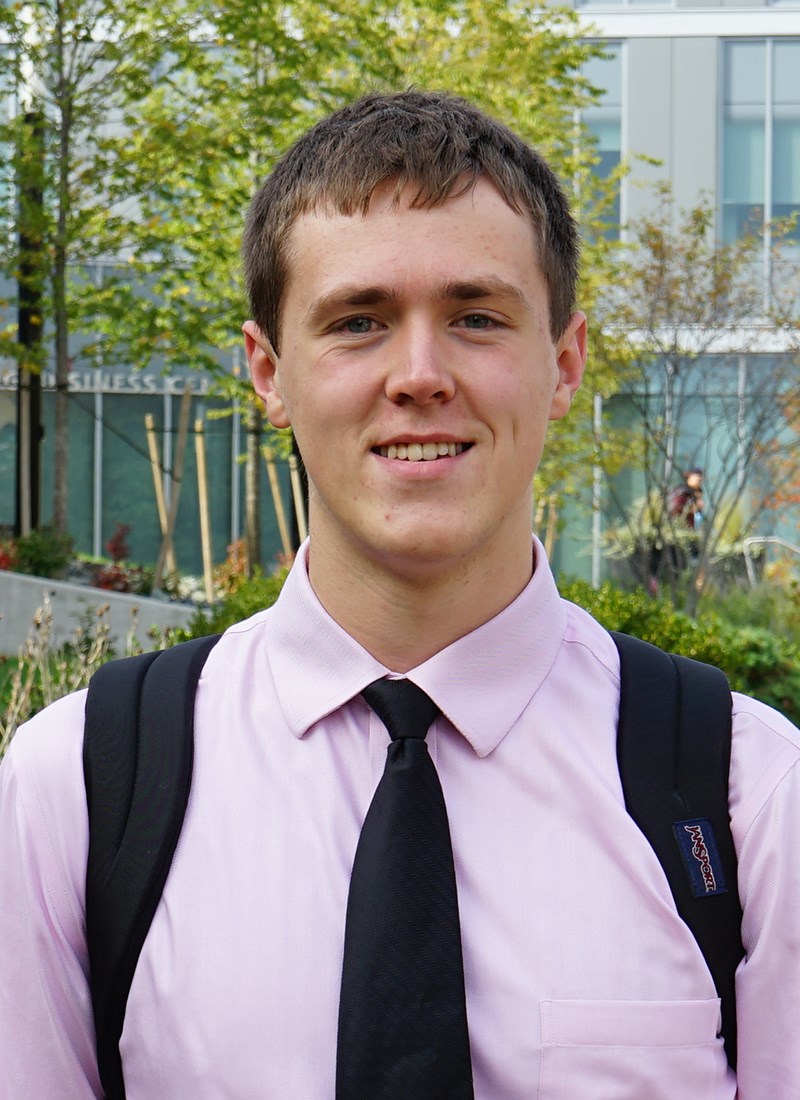 At a university known for its hard-working, financially pragmatic students, Kelly Michael Skelton may be in a league of his own.
“I define myself as a workaholic,” says Skelton, a business administration major (with concentrations in marketing and management) from Billerica.
Despite juggling two jobs, an internship and multiple extracurricular leadership roles, Skelton plans to earn his undergraduate and MBA degrees from the Manning School of Business in just four years – and without a penny of debt.
How can he do it? Skelton’s spelling it all out in a book that he’s writing in his not-so-spare time.
“It’s a guidebook with tips and tricks on how to reduce or eliminate student loan debt,” says Skelton, who is using a combination of scholarships, community college credits and full-time work to avoid taking college loans. He hopes to publish the book by the time he graduates with his MBA in May 2019.
Skelton says he inherited his “go, go, go” work ethic from his mom, Kathleen, who is director of strategic marketing for a fiber optics company in New Bedford.
“She works 70-80 hours a week and has given me and my three younger sisters every opportunity. She’s an extraordinary role model,” Skelton says. “She keeps me thinking rationally and ambitiously.”
Skelton discovered a passion for marketing while on a business track at Shawsheen Regional Technical High School, where he began earning college credits through Middlesex Community College’s dual enrollment program. That gave him a head start on his bachelor of business administration degree, which he’s on track to complete in three years by taking six courses a semester.
In addition to working as a part-time marketing contractor for his mom’s company, Skelton works close to 40 hours a week as a tracking analyst for Billerica-based South Shore Gunite Pools. Skelton’s in the office most mornings at 5:30 a.m. before heading to class at 9:30 a.m. He then returns to work in the afternoon before doubling back to campus in the evening for club meetings.
“It’s a busy schedule, but definitely manageable. I’m good with organization and great with time management,” says Skelton, whose biggest nemesis is Lowell traffic.
Skelton says he chose UMass Lowell for its impressive return-on-investment rankings, along with its infrastructure growth and extracurricular opportunities.
As a sophomore, he served as marketing manager (and then vice president) for Love of the Game, a student-run nonprofit organization that hosts adaptive sports clinics for developmentally disabled individuals.
This year, as co-president of the Marketing Society, Skelton helped run the Pandora Challenge, a daylong marketing competition held in conjunction with the Music Department that attracted more than 70 students to the iHub on a Saturday. He also helped organize Marketing Society events like a website management presentation that he gave to more than 30 fellow students.
As a writer for the Connector student newspaper, Skelton profiled the new Manning Women in Business club. He was so impressed by the organization that he became its first male member, serving as junior vice president of marketing.
“Being the only male in a meeting with 50 women has given me a unique perspective,” says Skelton, who also serves as a peer mentor at the business school and has worked as an intern for the Office of Technology Commercialization.
“I’m never fully satisfied, but I’m always as happy as can be,” says Skelton, who dreams of one day working for his digital marketing hero, Gary Vaynerchuk, at VaynerMedia in New York. “There’s a lot of underlying opportunity here at UMass Lowell.”