Skip to Main Content
Home The Office of Sustainability Engagement 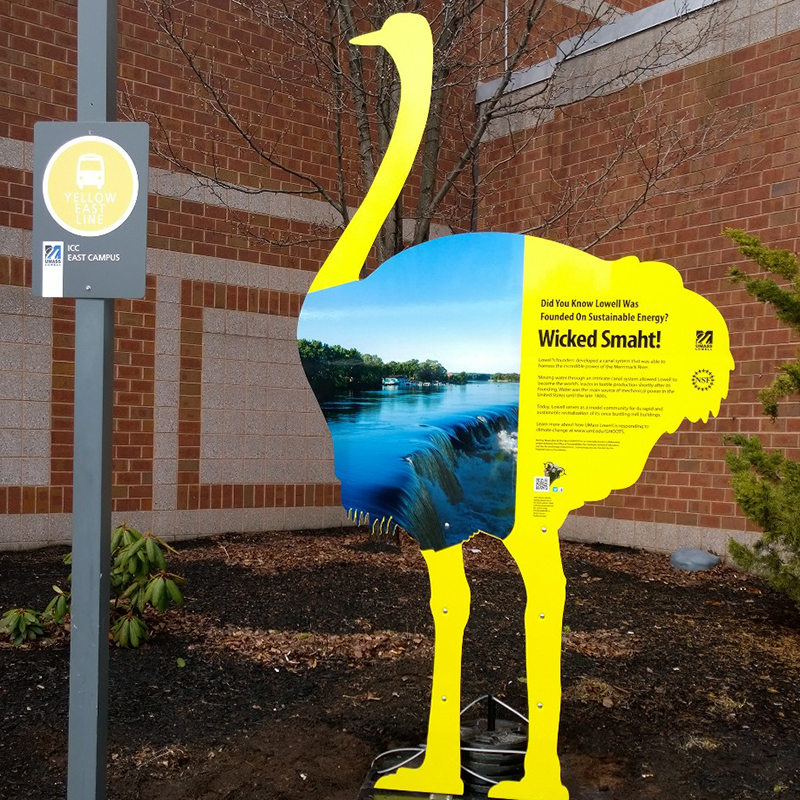 From June 1, 2016 to May 31, 2018, a Sustainability Cultural Assessment was sent out to the entire student population. This assessment of the student body's interest in and engagement with climate change and sustainability on campus is part of our AASHE STARS Reporting and better guides our actions on campus!

This dynamic campus sustainability cultural assessment was based on the work done in the College of Education in a White House award-winning climate education program called ScienceToGo. Several large ostrich cutouts were designed as out-of-home media educational tools for campus sustainability culture, and the campus community was surveyed before and after they were spread around campus. The project was called Getting Heads Out of the Sand or GHOOTS.

The GHOOTS team consisted of representatives from three UMass Lowell departments: College of Education, Office of Sustainability, and the Art and Design Department. To create a learning opportunity for the UMass Lowell community, this interdisciplinary team developed an informal science learning campaign on UMass Lowell’s campus by re-purposing Sciencetogo.org’s Out of Home Media (OHM) (i.e., the ostriches) that were in storage.
The Center for Program Evaluation (CPE) staff conducted formative research on the campaign. The goals for the GHOOTS project were to:

The assessment was administered through Qualtrics, an online survey management tool and sent to the entire campus community through email. A prize-drawing incentive was offered to student participants in both the pre- and post-survey.

Currently, the research team is working on a manuscript about this project that they intend to submit to an academic journal such as International Journal of Science Education, Part B: Communication and Public Engagement, Public Understanding of Science, or Connected Science Learning. In the near future, the team will reconvene to discuss how these results can be used to possibly develop a larger proposal on informal education for the National Science Foundation.
Brief Conclusions
UMass Lowell’s community represents a diverse and captive audience most of whom spend several hours a day on campus. This project was a relatively inexpensive strategy for engaging adult audiences with informal science learning. Over the course of several months, the flock of ostrich displays engaged students, faculty, staff, visitors, and other members of the greater Lowell community.
The findings suggest that the use of the ostriches was in general a positive addition to the UMass Lowell campus. It was found that those who reported seeing and reading the information on the ostriches about walking between campuses were people who walked between campuses more than those who did not. Similarly, we found that those who saw and read the ostriches used campus shuttles more frequently than those who did not. They were also more aware of the information about sustainable practices on campus, such as: how to borrow a bicycle, that the campus is a tree campus with a campus garden, and that the campus has LEED buildings.
The challenges experienced (theft and damage) were unexpected because there was no damage to the ostriches when they were on display multiple times in the City of Boston. However, we have learned that putting displays on a university campus comes with some risk. To mitigate that risk, we recommend putting displays in areas that are within a video camera’s range and adding a GPS chip to each display so that it could be recovered in the event it is stolen.
Despite the challenges faced, the GHOOTS project did provide a group of researchers the opportunity to engage the UMass Lowell’s community in the science of climate change, improve upon their understanding of current sustainability efforts on campus, and help the Office of Sustainability obtain some data about UMass Lowell community’s attitudes towards climate change and awareness of their sustainability efforts. This campaign also provided another means of promoting UMass Lowell’s sustainable practices.