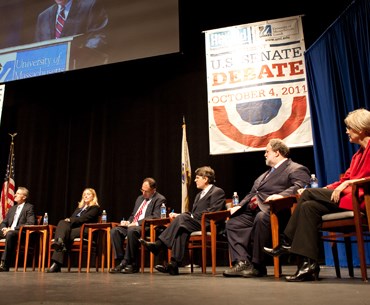 Warren Gives Brown a Run for the Money

Current results from the poll show Elizabeth Warren and Scott Brown are about even in the race for Massachusetts' U.S. Senate seat. In an early general election trial heat, 41 percent of the state’s registered voters say they’d likely vote for Brown and 38 percent for Warren if the November 2012 election came down to a choice between those candidates.

The poll indicates Brown is running strongly among political independents (he gets 48 percent, to 29 percent for Warren, with most of the rest undecided). He also draws more support from Democrats (16 percent) than Warren gets from Republicans (6 percent). Those were key factors in Brown's 2010 victory and remain important for any Republican seeking statewide office in strongly Democratic Massachusetts. On the other hand, Warren runs just about even with Brown among self-described moderates (44 percent of whom favor Brown, 38 percent Warren - within sampling error for that subgroup).

Nearly Half Think Brown's Not Doing Enough for Middle Class
Warren is positioning herself as a champion of the middle class – and that’s a potential vulnerability for Brown. Nearly half of registered voters, 48 percent, say the Republican incumbent is doing too little for the economic interests of the middle class; 37 percent say he’s doing about the right amount, and 4 percent say he’s doing too much.

Warren Gets Early Nod for Dem Nomination
In the race for the Democratic Senate nomination, 36 percent of potential Democratic primary voters say they’d most like to see Warren advance to face Brown, who’s expected to be unopposed for the GOP nomination; no other Democrat is picked by more than 5 percent. But as the race heats up, the other candidates have room to gain. In all, 28 percent of potential Democratic primary voters volunteer that they don’t know whom they prefer yet and 11 percent say they’d vote for none of the announced candidates.

Who hasn’t heard of the Democratic candidates yet?
Thirty-seven percent of registered voters haven't heard of Warren, compared to just 8 percent who say they haven't heard of Brown. At least six in 10 Massachusetts registered voters said they had not yet heard of each of the other six candidates for the Democratic nomination who were officially in the race when the poll was conducted – Thomas Conroy, Marisa DeFranco, Alan Khazei (who unsuccessfully sought the Democratic nomination in the 2010 special election), Bob Massie, Herb Robinson and Setti Warren. The day after the poll ended, Setti Warren announced his withdrawal from the contest.