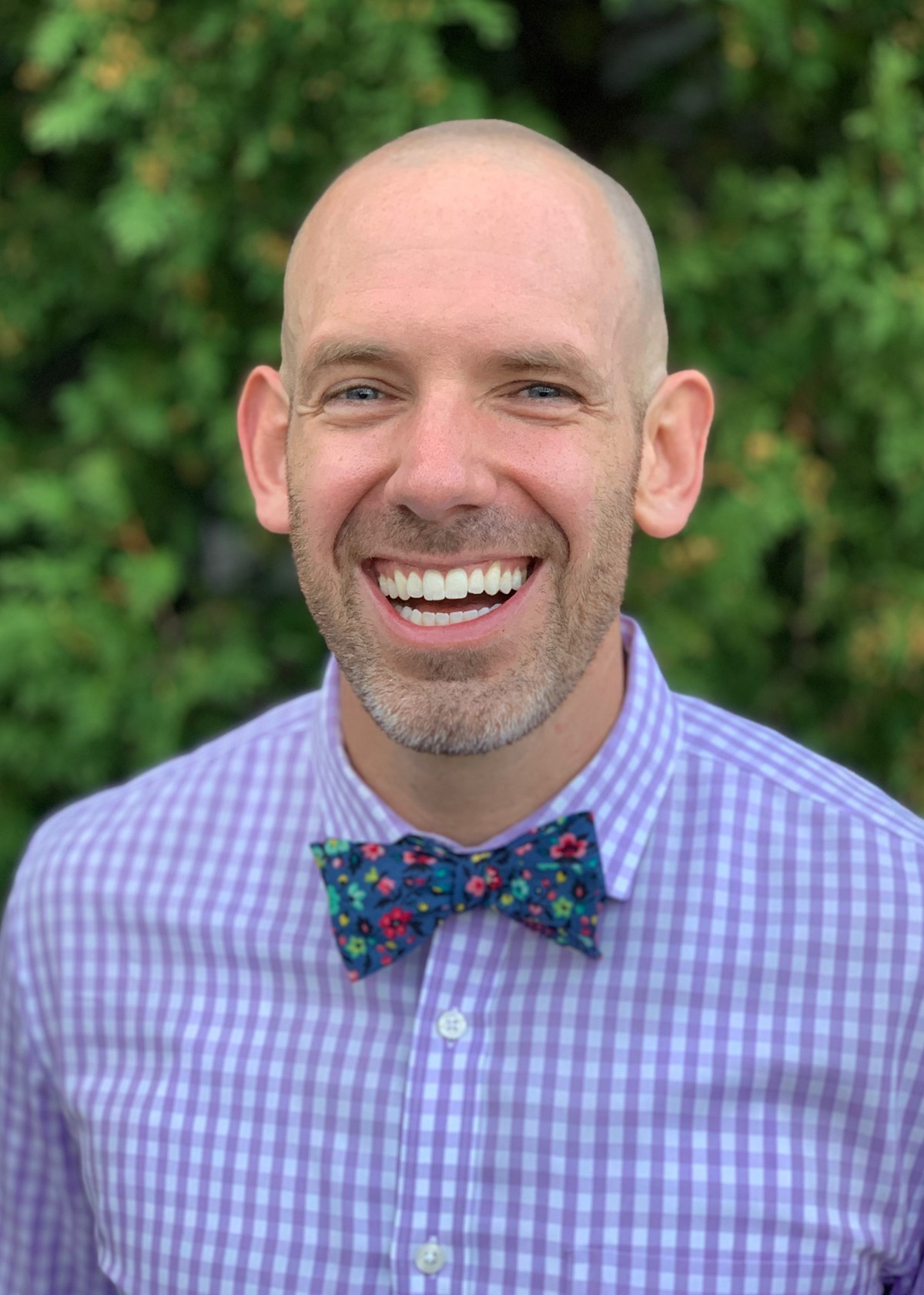 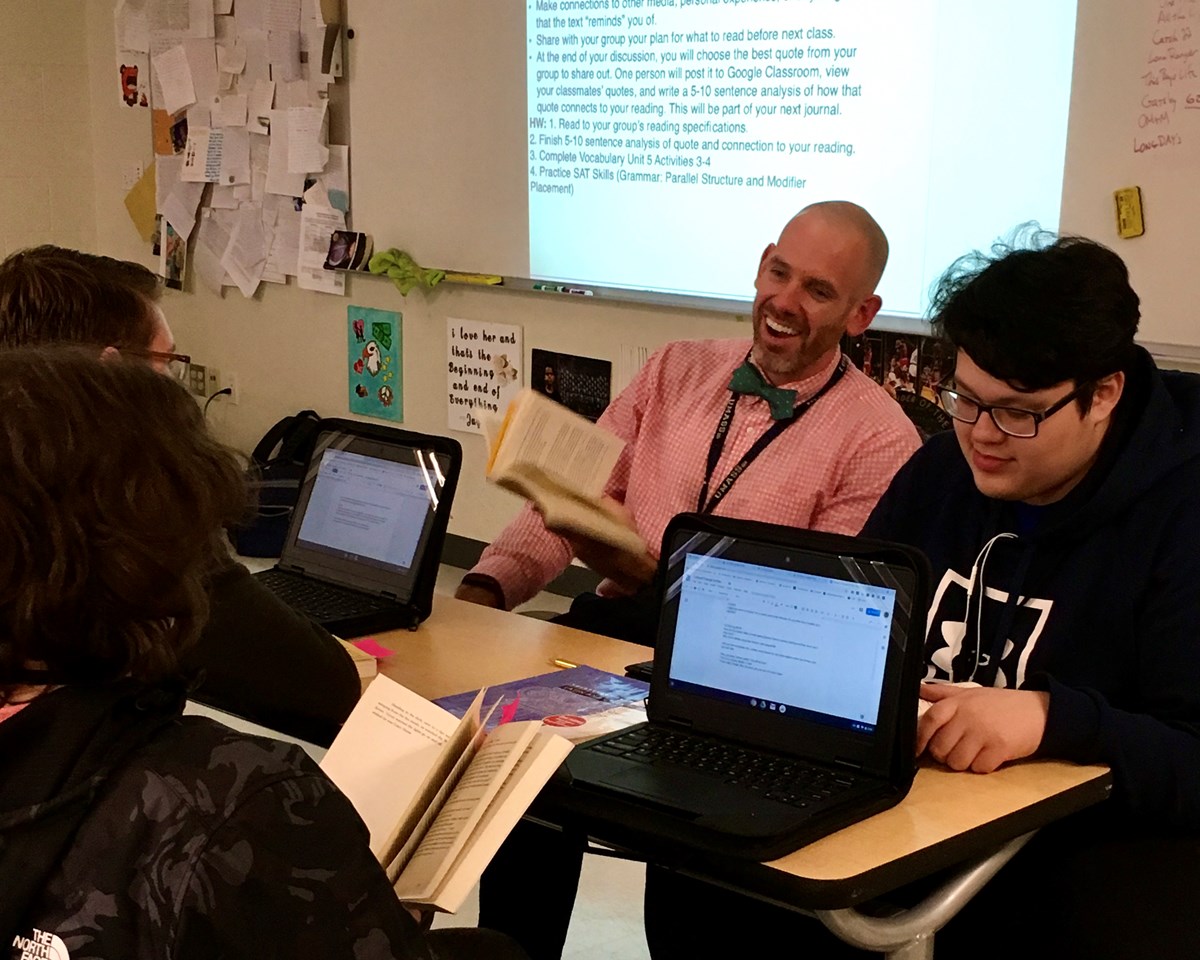 John Martin wasn’t a standout student at Groton-Dunstable Regional High School. Yet his teachers always told him, “John, you’re going to be a teacher.”

“I thought, ‘I’m barely hanging on in your class. What do you see in me?’” he says. “But when you hear something enough, you start to believe it yourself.”

Fifteen years later, Martin, now a high school English teacher in Wethersfield, Conn., was named Teacher of the Year by his district and a finalist by the state.

That’s because, in addition to teaching popular classes in journalism and literature courses in cultural change and racism in America, he advises the student journalism club and leads study abroad programs. Three years ago, he also launched a student-run news website, The Eagle Eye, that reports news of interest to students, teachers and the community.

Martin says he owes much of his success to UMass Lowell, where he earned an undergraduate degree in English literature in 2010 and a Master of Education in Curriculum and Instruction in 2013. But when he first arrived on campus, he was unsure of what to study.

He started with English, because he loved to write. Professors in the English Department encouraged him, including Assoc. Prof. Jonathan Silverman, who, along with some of Martin’s classmates, urged him to write for The Connector, the student newspaper.

As a commuter student, he initially struggled to find his place on campus.

“But the English Department had these unbelievable events where you could go talk to the professors about the courses they were going to teach the next semester. You got to know them a little bit personally, and that was important to me. Then I joined The Connector, and that helped me make real inroads.”

He freelanced for The Lowell Sun, The Boston Globe and The Phoenix, an alternative weekly. After graduation, he worked for an online local news site while starting on his master’s degree. But he didn’t enjoy the marketing side of that job.

So the following year, he got a long-term substitute teaching position at a middle school in Pepperell, Mass., and then completed his M.Ed. by teaching at Greater Lowell Technical High School. That was particularly difficult, because Martin knew that most of his students would graduate into jobs instead of going on to college.

“The big question was, ‘How can I prepare them through literature for their careers?’” he asks. “That was a great challenge as a teacher, but it taught me so much.”

The week he graduated from the School of Education, he drove to Connecticut to interview for the job at Wethersfield High School and to teach a demonstration lesson. It was the day of the school’s junior prom, so he discussed “The Great Gatsby” and the social etiquette and style of the 1920s. The next week, he was offered the position.

Seven years later, as his district’s Teacher of the Year, he’s not resting on his laurels. He and about a dozen other state finalists will get new professional development opportunities and will work together with Connecticut education officials on projects that include improving distance learning – a timely objective with schools closed due to the COVID-19 pandemic.

They’re also collaborating on a book, a project that’s dear to Martin because of his own path.

“We’re asking teachers the story of what brought them into education or what has impacted them through their educational journey, and we’re bringing in students to write short essays about teachers who really influenced them,” he says. “We hope to publish this for teacher prep programs and bring it into high schools, so students could consider going into education themselves.”