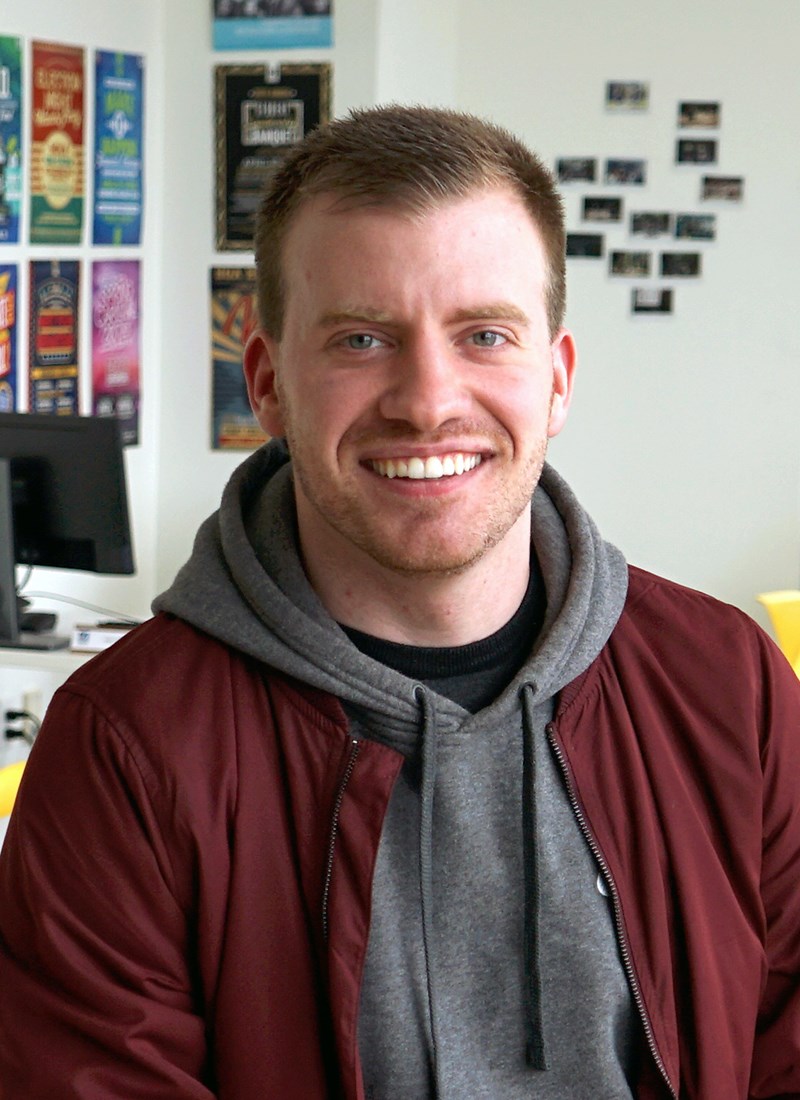 For Andre DiFilippo, 2018 was a year to remember.
He was elected president of the Student Government Association. He landed a summer marketing internship in Australia, where he jumped out of an airplane and surfed the Great Barrier Reef. He shook hands with Oprah Winfrey and presented her with a UMass Lowell hockey jersey.
“It was quite a year,” says DiFilippo, a senior business administration major from Malden with concentrations in marketing and management.
Of course, 2019 is shaping up to be another big year for DiFilippo. In May, he’ll become the first member of his family to earn a college degree. Then it’s off to the working world, where he hopes to land a sales role for a tech company in the Boston area. Salesforce, the cloud software giant that has developed strong ties with UML, is high on his list.
“It’s pretty cool that the university has a great relationship with a company that’s rated one of the best to work for in the country,” says DiFilippo, who founded a Salesforce Leaders Group at UML this winter to help students learn more about the customer relationship management (CRM) platform.
As SGA president, DiFilippo has strived to be the voice of all 18,000-plus students. Based on survey feedback and open forums, he helped shine a light on student mental health issues, which university administrators responded to with increased staffing at the Wellness Center. He and SGA Vice President Vilma Okey-Ewurum also have worked to improve access to campus resources for international and LGBTQ students, and they were able to make University Crossing accessible 24/7 for students during finals week.
“It’s been more work than I expected, but it’s also been very rewarding,” says DiFilippo, who estimates he puts in 15 to 20 hours a week meeting with student senators, executive board members and university administrators.
Being part of Oprah’s visit to campus in November, which brought in $3 million in scholarship funds for UML students, was a “surreal experience” for DiFilippo, who remembers watching her talk show with his single mom as a kid.
“Oprah’s visit was an ideal moment in the university’s history because of all the good that will come from it,” says DiFilippo, who knows what kind of an impact scholarships can have for students – he received the Matt Drouin Scholarship in 2018, which paid for his final year of school.
As his undergraduate days draw to a close, DiFilippo looks back at the mentorship he’s received and considers himself lucky. Chancellor Jacquie Moloney, Vice Chancellor for Student Affairs and University Events Larry Siegel and Manning School Dean Sandra Richtermeyer have all been influential. And Dean of Academic Services Kerry Donohoe helped him realize his leadership potential.
“Before I met her, the thought of becoming SGA president wasn’t in the cards,” DiFilippo says. “She helped me with everything from public speaking to being more organized.”
And to think, DiFilippo was thisclose to attending a more leafy (and expensive) private university.
“I’m thankful every day that I chose UMass Lowell,” he says. “Seeing how much I’ve personally grown, and how much the university has grown, in my four years here has been unbelievable.”