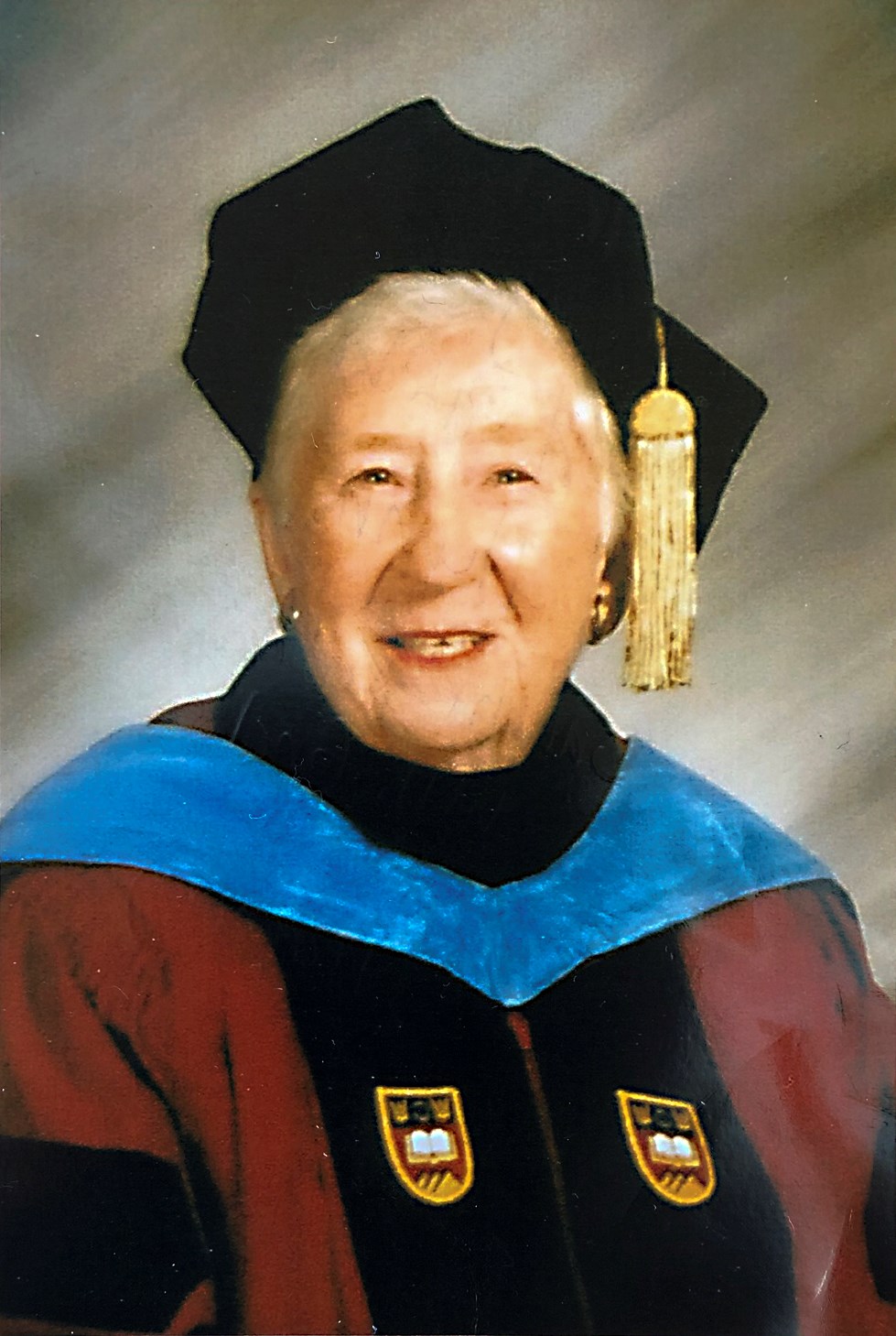 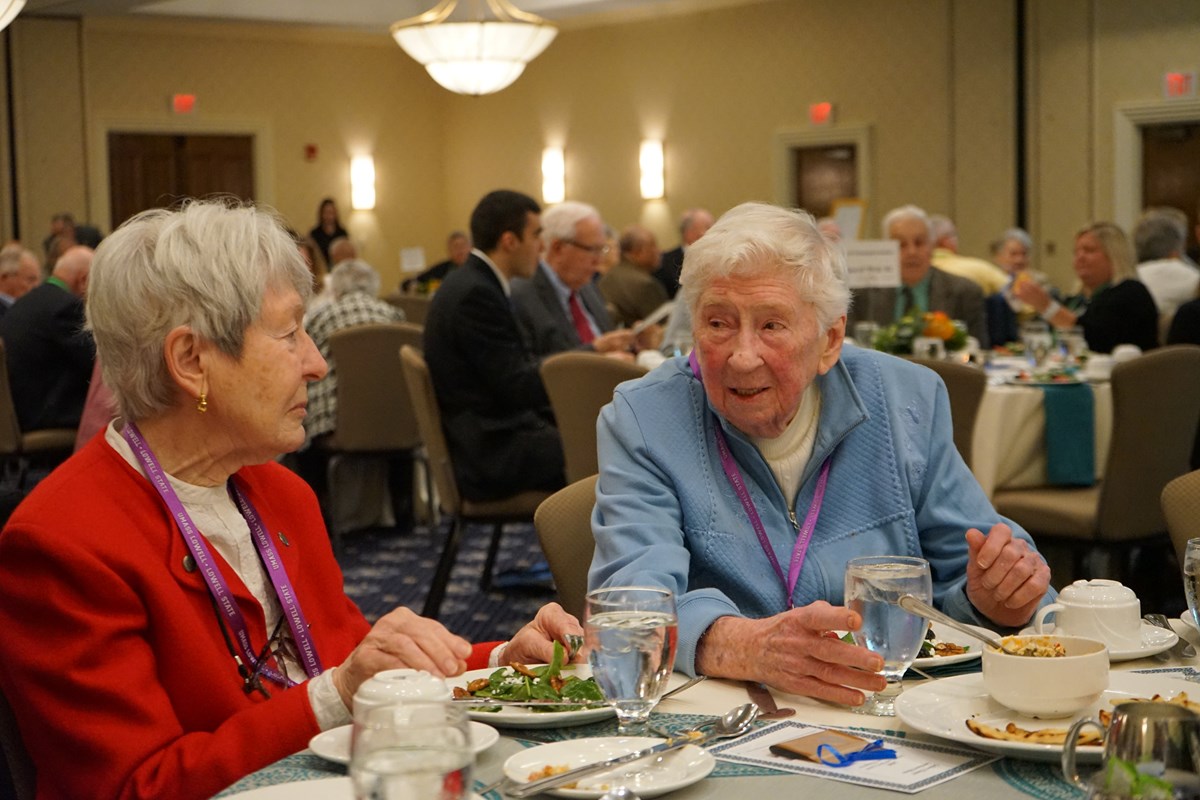 Gertrude Bailey ’48 grew up in Lowell and planned to study math at Lowell Tech. But her father died unexpectedly, and as the oldest of six children, she postponed college to help her family.

Instead, she worked in a commercial laundry that washed all of the bed linens from Fort Devens, and then at a retail store. She also took two night classes at Lowell Tech, one in petroleum science and one on the history of the Irish in Lowell. Each class cost $1 for Lowell residents. When the fuel science professor asked why Bailey was taking his class alongside experienced engineers, she told him, “Because I miss school.”

By the time Bailey was ready to go to college, she’d decided to become a social worker. Her uncle suggested that she complete her first year of study at State Teachers College at Lowell while living at home, and then complete her degree and get her master’s in social work in Boston. He offered to pay the tuition for that first year: $75.

Bailey started college in fall 1944 at the height of World War II, one in a class of about 40 women. “We only had the one building. We called it ‘the yellow school on the corner,’” she says of the oldest building on campus, now named Coburn Hall.

After that first year, Bailey decided to stay at Lowell Teachers College. She worked her way through school, taking the bus from Coburn Hall to the Prince pasta factory, assembling boxes for an hour or two and then taking the bus back to campus just in time for her next class. She worked in the textile mills, too.

Her uncle had insisted that Bailey do one school activity that was not academic. Bailey, who loved sports, became president of the student Athletic Association, helping to organize games between the student teams, Army and Navy.

When Bailey graduated in 1948, men had returned from the war to teach. At that time, married women weren’t allowed to hold full-time teaching positions in most Massachusetts school districts, Bailey says.

Bailey got a job at an elementary school in Springfield, where she taught for three years while waiting to take Lowell’s teaching examination. She did well on the test and returned to Lowell as a teacher at the Bartlett School, where she was assigned a combined class of first- and second-graders: first-graders who hadn’t gone to kindergarten, and second-graders who hadn’t been promoted from the first grade. “They were great, great kids, and we learned together,” she says.

Bailey soon joined the Lowell State faculty, serving as a teacher-demonstrator at the Bartlett School, where she oversaw the next generation of student teachers. She also taught classes at Lowell State for teachers with three-year teaching certificates who needed to earn their bachelor’s degrees. And during the summers, she worked for the state Department of Education at several different teaching colleges, including Fitchburg State, where she also got a master’s degree.

Bailey went on to earn her Doctor of Education degree from Boston College in 1969 – becoming the first Lowell teacher to earn a doctorate from an accredited university. Shortly afterward, she was named principal of Lincoln Elementary School. “I was the first woman hired as a principal in Lowell in 30 years,” she says.

In 1975, she met her first Spanish-speaking student, and decided to study Spanish in Mexico over the summer so that she could communicate with all of her students and better understand their culture. “I loved teaching because I loved the children,” she says.

Bailey retired in 1987 and joined the Jesuit Volunteer Corps, working in Alaska for three years at a shelter for victims of sexual assault and domestic violence. She cared for and taught the children who came with their mothers to the shelter, went to court to advocate for them and visited dozens of village schools to teach about personal safety.

Shortly after she returned to Lowell, the city began building a new elementary school. When it opened in 1992, it was christened the Dr. Gertrude M. Bailey Elementary School, in recognition of Bailey’s influence on so many children and teachers in the city – and of how she paved the way for other women educators.

Bailey continued to volunteer at the Catholic Charities food pantry and other city organizations. “I volunteered at the Lowell Folk Festival for 24 years in a row,” she says proudly.

Now 94 and fully retired, she moved – reluctantly – to a condo in a building with an elevator in Tewksbury a couple of years ago. But she still attends events for “golden alumni” on campus and visits the Bailey School every year to see the fourth-grade play and say hello to old friends. “Lowell is my heart and my place,” she says.