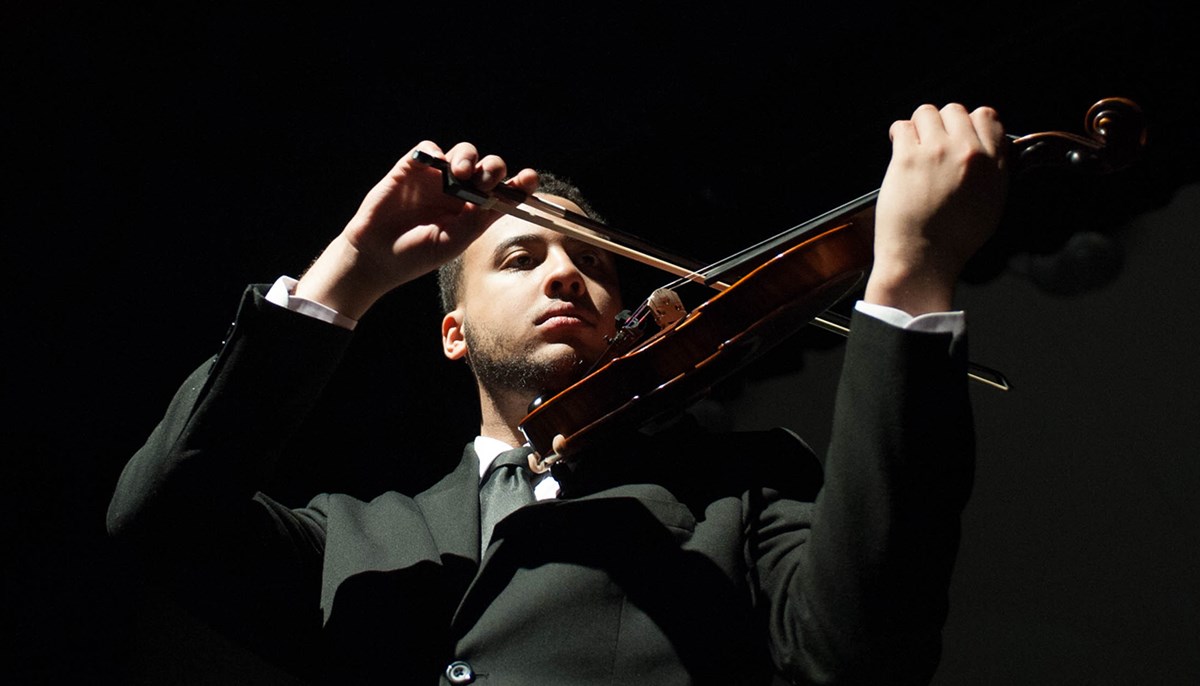 It’s not something you’d expect to hear from a 7-year-old kid growing up in the city of Lowell. But when young Joshua Santana first saw a violin performance on TV, he was spellbound. “The sound was just miraculous. Beautiful.”

Thanks to the UMass Lowell String Project, a music education and community engagement initiative, Santana got the opportunity to start learning to play the violin in the third grade.

“It was an emotional outlet to be able to play,” says Santana, who remembers coping with behavioral issues at the time. “Playing music through the String Project was one of the main things that really, really got me out of that. I had something to focus on, something to look forward to.”

Now majoring in music education, Santana is still involved with the String Project, only now on the other side of the music stand as teacher for 35 Lowell grade-schoolers.

“I definitely see myself in some of those kids,” says Santana, who plans to begin teaching at the elementary school level after completing his five-year master of music education degree. “I know what it’s like to be in their shoes, and having that experience gives me a natural connection. As soon as class starts and we’re tuning our instruments I’m talking to them, asking them questions, seeing how their day was.”

It’s the kind of personal attention Santana remembers getting from his String Project teachers throughout middle school and high school. He calls former master teacher Ben Parisi, a UMass Lowell alum, “one of the greatest figures of my life.”

“He was an important mentor to me,” says Santana, who grew up without a father. “We would talk about getting through school, getting through managing emotion, stuff like that.”

Santana hopes to make a similar impact on the lives of his students.

“I would love to see more String Project students follow in my footsteps,” he says. “I feel like if they can see me at the college level, they see me being successful and mentoring them, it gives them something to look up to.”

While violin will always be Santana’s first love, he took up the clarinet in high school and it is now his primary instrument. “I realized that it’s something that helped me express myself even more, because different instruments help people in different ways,” he says.

He had taught his students a little song to remember how to properly hold their bows, and when he heard the kids quietly singing the words to themselves on the concert stage — “The fox walks on the wooden dock and dips his feet right in. He casts a hook ahead of him and listens to it sink, sink, sink.” — Santana was overcome with emotion.

“Just hearing them sing that song, I almost wanted to shed tears on stage,” he says. “It blew me away.

“To be given this opportunity now, as a second-year student, to actually teach children, it’s so enriching.”