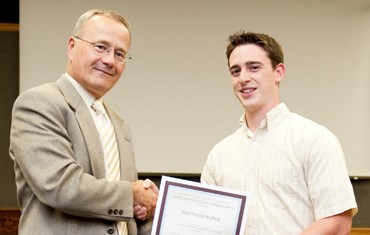 Matt is working to develop superior materials for food packaging such as the bags that hold soldiers’ field rations, or MREs (Meals Ready to Eat). His senior capstone project involves incorporating nanoparticles into multilayer film structures that can both preserve freshness and remain durable, while becoming lighter and more recyclable than materials that are currently being used.

It was during his first year of classes, when students are introduced to all the branches of engineering, that Matt discovered plastics engineering. “I like the combination of chemistry and innovation, and it’s a growing field,” he says. Matt is particularly drawn to research & development, where he feels he has the most latitude to explore new ideas and be creative.

For the last two summers Matt has held paid co-op positions at the nearby Natick Soldier Research Development & Engineering Center. He learned about the position during a co-op fair organized by the Career Services and Co-op Center, which also helped him prepare for interviews. “My co-ops earned me a salary and credit toward my degree,” says Matt, a participant in the Department of Defense CREST program, which recruits student engineers. “I’m in a very good position to have a job when I graduate.”

While he was accepted at several high-caliber engineering programs in the Boston area, Matt is happy that he chose UMass Lowell. Thanks to the professional standard of learning and his department’s strong connections in the field, Matt feels ready to make a name for himself developing new standards for greener, more biodegradable plastics.