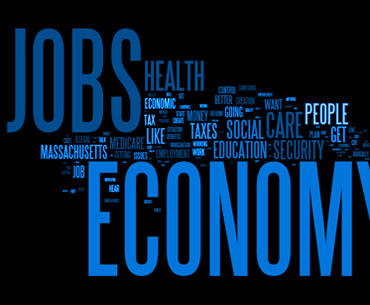 What Do Massachusetts Voters Care About?
Not surprising, jobs and the economy topped the list of issues that survey respondents want addressed at the debate of democratic candidates for U.S. Senate on Oct. 4. Overall, Massachusetts voters are in a sour mood about the state of the nation - and they generally prefer Democratic policy priorities. In 2010 Brown rode the former to victory despite the latter (and against a candidate considered to be a weak campaigner). The survey also asked about specific issues like health care reform, social security and the budget deficit.

U.S. on the Wrong Track
Sixty-two percent say things in this country today are “seriously off on the wrong track” as opposed to “generally going in the right  direction,” comparable to the mood of the January 2010 Senate electorate as measured in the Washington Post post-election poll. Brown won 66 percent of “wrong track” voters in 2010 but only leads Warren 48 percent to 34 percent among them in this survey of all potential voters.

Economy Is Getting Worse
Forty-eight percent of registered voters say the nation’s economy is getting worse, and Brown leads Warren 49 percent to 28 percent among them. Warren leads by a comparable margin, 51 percent to 32 percent, among voters who say the economy is getting better, but only 11 percent say that. Warren leads 47 percent to 34 percent among the 40 percent who say the economy is staying about the same.
Third of Respondents Been Effected by Lay-off Thirty-five percent of voters say someone in their household has been laid off since the most recent U.S. recession began in 2007. That includes 17 percent of the poll respondents themselves.
Nearly Quarter of Respondents "Angry" With Republican Policies

While more voters view Brown favorably (52 percent) than unfavorably (29 percent), 37 percent of respondents said they are dissatisfied with policies offered by Republicans in Congress and another 23 percent said they are angry with those policies. The poll also captured how voters view the current Democratic president in comparison to the Republican U.S. Senator from Massachusetts.