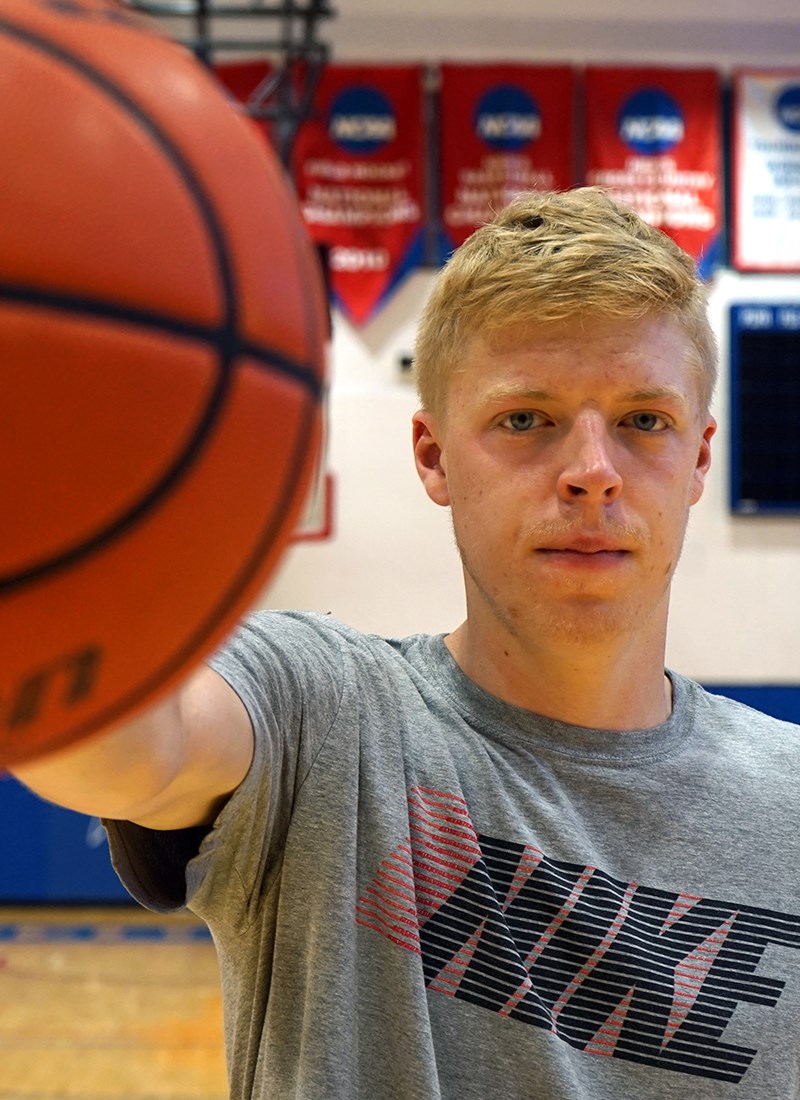 Midway through his first day on the job as a professional basketball player in Spain, Tyler Livingston ’17 found himself lying on a bench in the team locker room, getting stitches to close a gash on his brow caused by a teammate’s errant elbow.
The team’s medical staff couldn’t speak English and Livingston knew little Spanish, but he understood when they told him, “Don’t go home and wash your face because the water isn’t clean here.”
“It was a rough first day,” recalls Livingston, whose second day of practice with his new team, Arcos Albacete Basket, was even worse: The 6-foot-6, 210-pound forward from Hudson, N.H., suffered a sprained right ankle that sidelined him for three weeks.
Livingston eventually got on the court last fall and enjoyed a solid 2017-18 season for Albacete, which plays in the third tier of the Spanish basketball league system. He averaged 7.6 points and 2.4 rebounds in 18 minutes per game and was named the team’s most valuable player in a playoff game after scoring 17 points on 5-of-8 shooting from 3-point range — his specialty.
“Once I got playing, things turned around,” says Livingston, who helped lead Albacete to a 23-16 record. “Toward the end of the season and in the playoffs, I really came along, which was good for my confidence.”
Livingston, who played on a one-year contract for Albacete, plans to play another season overseas this winter — this time in Australia. But he’ll always treasure his time in Spain.
“We had the best fans in the league. The crowds were crazy,” Livingston says of playing in Albacete, a city of 172,000 people located in central Spain, roughly halfway between Madrid and the Mediterranean Sea. “After games, fans would come down and take pictures and get autographs. It was a cool thing.”
Livingston’s international basketball journey got off to an improbable start at UMass Lowell. Despite a standout basketball (and golf) career in high school, he wasn’t recruited to play in college. The summer before his freshman year in the Manning School of Business, where he studied finance, Livingston met then-Vice Chancellor Jacquie Moloney while working at Vesper Country Club in Tyngsboro.
“She’s one of the greatest people I’ve ever met in my life,” Livingston says of Moloney, who was so impressed by the future River Hawk that she made a point to mention his basketball exploits to Athletic Director Dana Skinner.
When school started in September, Livingston began playing pickup basketball games at the Campus Recreation Center. A few weeks later, Livingston was walking past Costello Gym when men’s basketball head coach Pat Duquette stopped him and invited him to come practice with the team.
“They liked what they saw,” says Livingston, who earned a spot on the River Hawks roster as a walk-on player. “It’s crazy how it all worked out. I thought I was done with basketball after high school. But it was a combination of the perfect people at the perfect time in the perfect system at UMass Lowell.”
His first game as a Division I college basketball player came on Nov. 8, 2013, when the River Hawks took on the seventh-ranked University of Michigan in Ann Arbor, Mich. Exactly seven months earlier, Livingston had watched Michigan lose to the University of Louisville in the NCAA championship game on TV. Now, he was battling them for rebounds in the paint.
“That was the craziest thing,” says Livingston, who came off the bench to score 10 points and grab a team-high nine rebounds in UML’s 69-42 loss. He says playing against a national powerhouse like Michigan taught him a valuable lesson. “I realized they’re just regular guys, college kids like me. It made me realize that you stack the deck against yourself in situations sometimes. It’s all perception in your head. If you think of it as, ‘I’m going to put the work in,’ then anything can happen.”
In his senior season, Livingston started all 31 games for the River Hawks, averaging 13.2 points, 4.6 rebounds and 1.7 assists. He shot 50.2 percent from the field and 46.2 percent from 3-point range, which was best in the America East Conference. His sharpshooting statistics attracted the notice of professional scouts.
After the season, Livingston got himself an agent and was soon weighing potential deals to play in Germany or the Republic of Georgia. By the end of July, he had decided on Spain.
“I had no idea what it would be like. You just go there and hit the ground running,” says Livingston, who shared an apartment in Albacete (paid for by the team) with two teammates, one a fellow American from Chicago and the other from Spain. The team also covered food expenses while paying Livingston “enough money to live well” in Albacete.
On the court, Livingston says it was difficult learning to play a foreign style of basketball (“super fundamental and slow”) against older and bigger players. Being one of only two Americans on the roster was also a challenge.
“Americans are definitely held to a higher standard, which is completely fine,” he says. “You know what you’re getting into.”
Livingston says he was able to adjust thanks to the friendship of his Spanish teammates, many of whom invited him to spend time in their home cities.
“The basketball was cool, but for me it was the traveling that really opened my eyes,” says Livingston, who treated homesickness by binge-watching American TV shows on Netflix. “It was tough being away from home, but you learn a lot when you see things from other people’s perspective.”