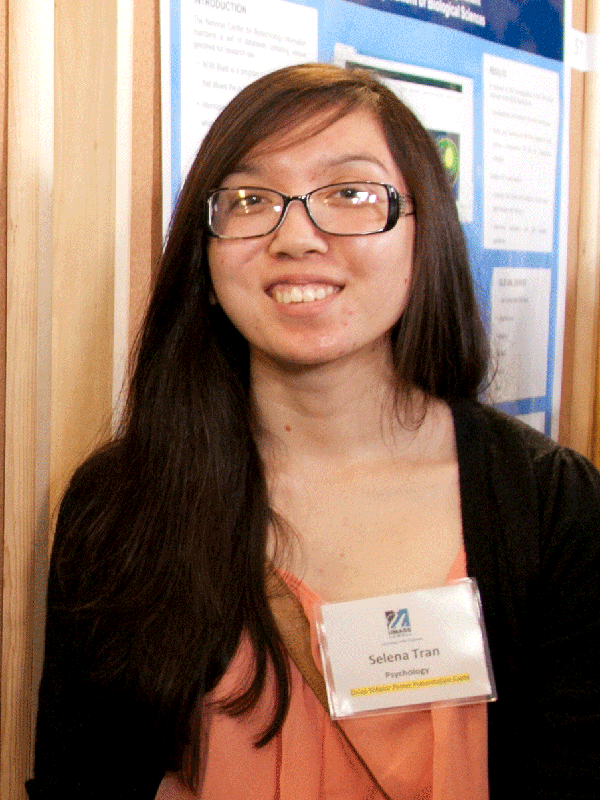 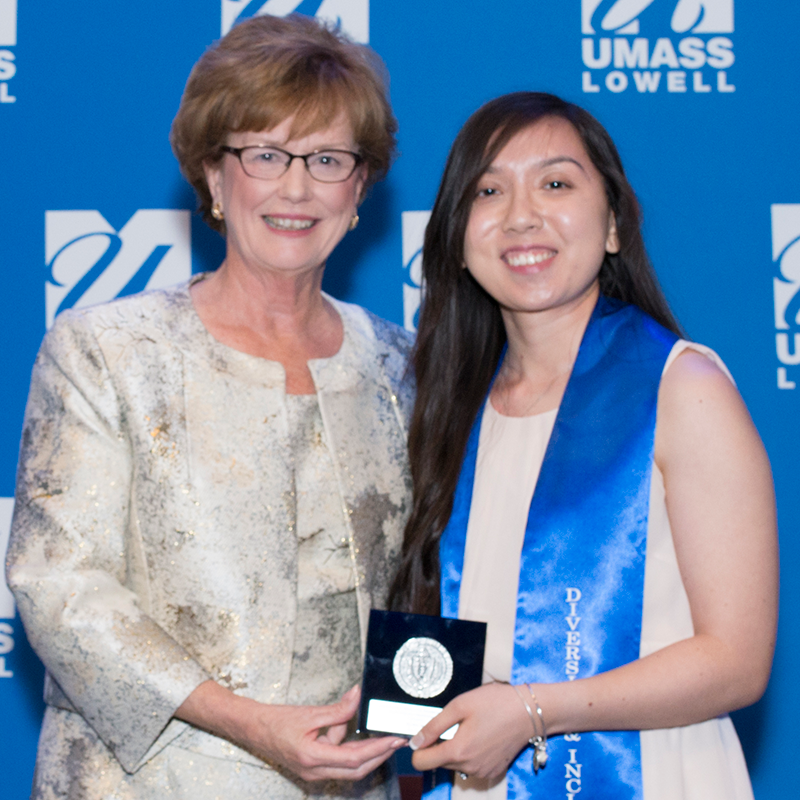 Selena Tran knows a lot about adaptive behavior and building relationships.
The daughter of Vietnamese immigrants and the first in her family to complete a four-year degree, Tran, a psychology major, studied adaptive behavior among college students — specifically, the acculturation of underrepresented minorities to college — with psychology Prof. Khanh T. Dinh.
That was her first research experience, thanks to a $4,000 Immersive Scholarship that paid her to do research with a faculty member the summer after her freshman year. It opened her eyes to all of the financial support available for undergraduate research and the value of building relationships with professors.
“I realized there was all this opportunity on campus to do research and get paid,” says Tran, who had previously worked 30 hours a week at Market Basket to help support her family.
After that, Tran worked with other psychology professors on projects including attitudes toward contraceptive use among Southeast Asian women (Prof. Ivy Ho), eye movements associated with learning (Assoc. Dean Richard Serna), and calibrating equipment for a study of synesthesia (Prof. Thomas Gordon), supported by an Emerging Scholarship and Honors College Student Fellowships.
“Research with professors was pretty much my life here,” she laughs.
For her Honors College capstone, Tran studied the behavior of five Western lowland gorillas at the Franklin Park Zoo, advised by Assoc. Teaching Prof. Mary Duell. At first, Tran looked for signs of adaptation to zoo life, but later she shifted her focus to individual differences and relationships between the gorillas. She also wanted to build a relationship with zoo officials and pave the way for future UML students to do research there.
She also worked at the Center for Asian American Studies, helping professors on multiple projects and presenting at the national Asian American Studies Conference. That work won her the Chancellor’s Medal for Diversity and Inclusion.
And in the summer of 2015, she won a National Science Foundation fellowship to work in a cognitive neuroscience lab at the University of Wisconsin-Madison. That research was inspired by the Disability in Literature class taught by Assoc. Prof. of English Bridget Marshall and yet another research project with a former professor, looking at whether cognitive training helps people with Alzheimer’s disease.
Her undergraduate research experience was so broad that she was unsure where to focus her graduate studies. But instead of stressing out over that decision, Tran decided to pause, adapt – and do more research.
“I’ve learned that no one’s path is really linear,” she says. “When I started at UMass Lowell, I was the kind of person who had to have a five-year plan and a 10-year plan, and that was definitely to go to graduate school. Then I realized it's OK to take a break — and that I had to figure out what I really love if I'm going to do it full-time.”
So right after graduation, she took a job with The Focus Foundation, a small nonprofit in the Washington, D.C. area that researches children with rare genetic disorders.
Working as part of a professional research team proved to be a valuable experience. Tran traveled the country and the world to study patients and present research. In three years, she published five papers, including one as first author. That paper discussed her research on the potential cognitive benefits of hormone therapy for boys born with an additional X chromosome.
Then, she returned to Lowell to spend time with her family while applying to Ph.D. programs in cognitive neuroscience. Her UMass Lowell network of faculty mentors helped her from start to finish, advising her on the process, writing recommendations for her, debriefing her after campus visits and interviews and giving her work as a paid research assistant so that she could support herself.
She was accepted into five excellent Ph.D. programs, including the University of Michigan’s program in cognition and cognitive neuroscience, which she started in fall 2020. She is fully funded for five years to study the effects of aging on brain functioning in older adults, including those with Parkinson’s and Alzheimer’s diseases.
“In all of my graduate school interviews, people were really impressed by how early I was able to start doing research and how many professors I was able to work with,” she says. “That UMass Lowell support system is very near and dear to my heart, especially as a first-generation student.”