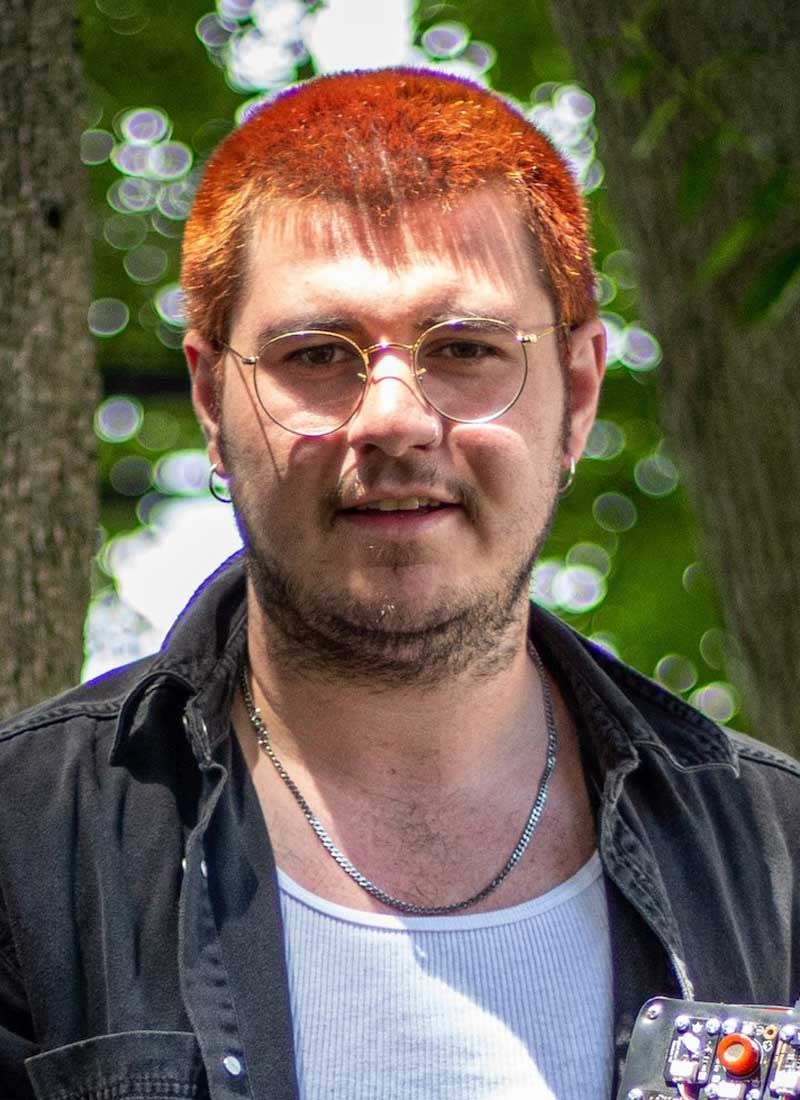 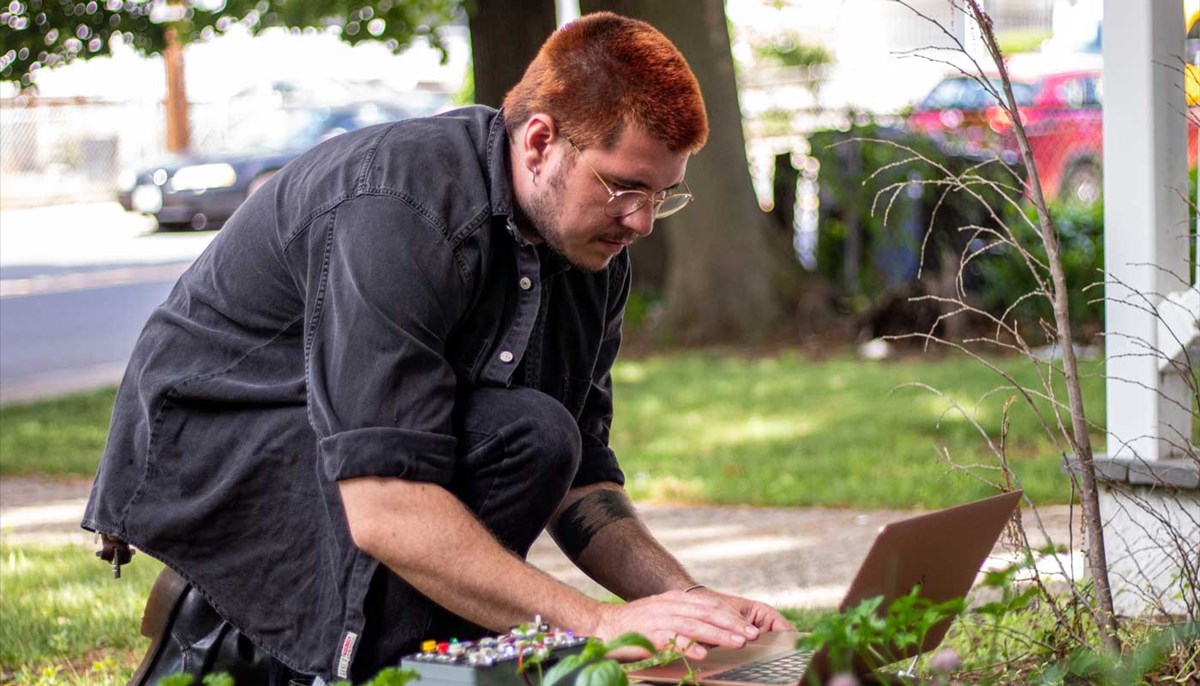 Sound recording technology (SRT) major Ryan Katz has been playing musical instruments, building things and “tinkering” since he was a kid.

He also loves hiking and the outdoors, and he found it surprising when other people on the trail would rather listen to their electronic devices than the sounds of the woods.

So perhaps it’s no surprise that, for UML’s Contemporary Electronic Ensemble, he designed and built a musical instrument he calls “The Meteorologist” that can “play” the air and the earth, using sensors he bought in a science kit and a few other components.

The Meteorologist starts by playing a simple chord progression. If Katz hits one button, it responds to atmospheric light, temperature and nitrogen content. When he hits another, it responds to earth conditions, including soil moisture, motion and changes in the magnetic field. More light makes the tone brighter; more soil moisture makes the reverberation deeper, giving it an underwater sound.

A third button activates a joystick, knob and track pad that are controlled by a human player. The sounds of human intervention are much more “rhythmically chaotic and jarring,” Katz says, representing our inharmonious interactions with nature.

“The atmosphere has a lot to do with what we create musically, and I wanted to see if I could make something so the atmosphere was actually creating the music,” he says. “But then I decided that I wanted an intersection between what we've created and what the environment creates.”

Katz grew up in Spokane, Washington, and then moved to Seattle, where he went to college for environmental science. He left after a year because he realized he wasn’t ready for college – largely because he was unsure what he wanted to do, he says.

Over the next few years, he went to woodworking school, worked in restaurants and played a lot of music. Although his first love is drumming, he played guitar and sang in a band. He also wrote some of the band’s songs and worked on recording and producing them. The band did not achieve commercial success, but Katz realized that he would enjoy a career in sound recording and production.

Then a good friend, who had moved to Boston for graduate school, told him a room had opened up in the house she was renting. Katz drove across country and moved in. “I was ready for a change,” he says.

He worked and studied for a semester at Bunker Hill Community College to “get back into a school mindset.” And then he transferred to UMass Lowell, where he was accepted into the competitive SRT program. His favorite ensembles – music majors must perform with two every semester – are the Percussion Ensemble and the Contemporary Electronic Ensemble, the latter led by Assoc. Teaching Prof. Ramon Castillo.

Castillo encouraged his ensemble students to post videos of their projects in the UMass Lowell “building” at the 2022 Maker Music Festival, a virtual event. Katz followed through, adding The Meteorologist and his first experiment: “Interstellar Bone Collector.”

“Interstellar Bone Collector” is an improvisational piece Katz and two friends performed in the key of A minor to a backdrop of space videos. Katz played a Yamaha keyboard that he’d tinkered with, creating short circuits on its sound chips – a practice known as “circuit bending” – to create new, unpredictable sounds that he could turn on and off with a switch.

In another ensemble project, Katz bought old cassette tapes in bulk at thrift stores and cut them into 5-second sound samples, which he uploaded and used to create original music. During another semester, he built a drum machine.

And he did all of that while studying Calculus I and II and Fundamentals of Sound Recording, plus doing recording projects for the major. He and a friend recently started a budget-friendly recording and production studio, Hot Take Recording Co., in the Brighton neighborhood of Boston, and he’s looking for an internship with an established recording studio, a practicum that’s required for his major.

After graduation, Katz hopes to work at an established recording studio. To that end, he will take a class on repair and maintenance for the electronics that sound engineers work with. He believes his ability to create and repair things will give him an advantage when he applies for jobs.

“If I know how to fix the equipment, that’s huge, because it doesn’t matter how much you spend on the equipment,” he says. “It’s always breaking.”