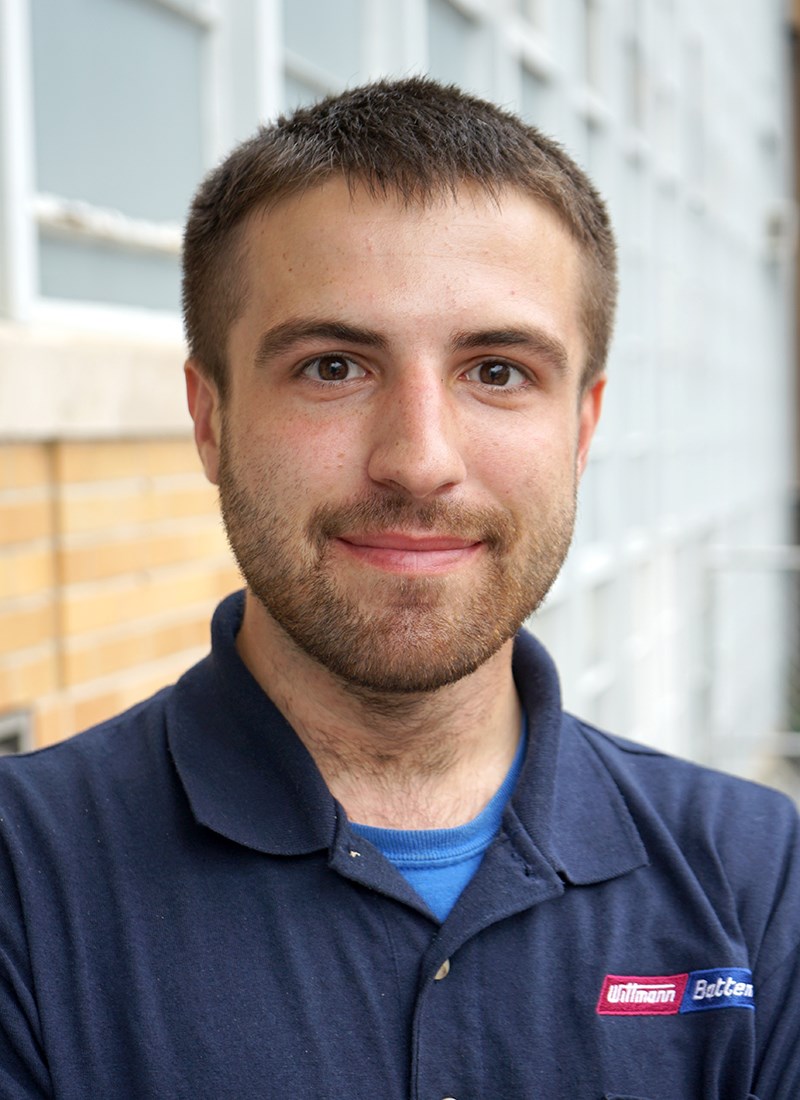 Plastics engineering major Patrick McCallum had an idea.
During his eight-month internship at Wittmann Battenfeld, a leading manufacturer of injection molding machines, robots and automation systems, McCallum thought of an end-of-arm tool that could be added to the work cell that the company had recently supplied to the Francis College of Engineering. The adjustable tool would allow students to potentially set up various molds and implement automation in their process on the machine.
McCallum suggested the addition to Wittmann Battenfeld's president, UMass Lowell alum David Preusse '85.
"He thought it was a great idea," McCallum recalls. "He was really on board with it."
So McCallum began putting the tool together while still on his internship at Wittmann Battenfeld's U.S. headquarters in Torrington, Conn. When he returned to campus for the fall semester of his senior year, McCallum helped oversee the tool's installation in the Wittmann Battenfeld Precision Injection Molding Laboratory, located on the first floor of Ball Hall.
"It will make the work cell more usable for the school," says McCallum, who never expected his internship would give him a direct line of communication with the president of a multinational company with $400 million in global revenues.
"It was nice to have that kind of connection with an alum," McCallum says.
A native of Billerica, McCallum says he chose UMass Lowell because it simply made sense - a highly ranked engineering school right down the street from home. Originally a chemical engineering major, McCallum began noticing students working on the "impressive machinery" while walking past the plastics engineering labs. So he switched majors the spring semester of his freshman year and joined them.
"It was the best move for my academic career. I've really enjoyed it here," says McCallum, who counts the Plastics Department chair, Prof. David Kazmer, and Assoc. Prof. Stephen Johnston among his favorite faculty members.
Following his sophomore year, McCallum landed an eight-month tooling engineer co-op job at Edgewell Personal Care, a leading consumer manufacturer. That gave him experience with various types of software, including Autodesk Moldflow Simulation, Pro-Engineer 3D Modeling and AutoCad Drafting.
McCallum then introduced himself to Wittmann Battenfeld at a Career Fair and laid the foundation for his internship.
"It was a blast. The people were great," says McCallum, who was able to take several classes online while living in Connecticut during the full-time internship. He also took a robotics course offered on-site by the company, which gave him deeper insight into the future of automation.
"It's good to be able to set up the robots and use them," says McCallum, who also learned about the importance of the emerging "Industry 4.0" at Wittmann Battenfeld - the current manufacturing trend of automated, smart factories.
"Wittmann Battenfeld's at the front edge of 4.0," McCallum says. "As a student, it's rewarding to be involved with that kind of technology. Most people don't have a clue what newer machines are capable of. Now, I'm able to talk about those sorts of things."