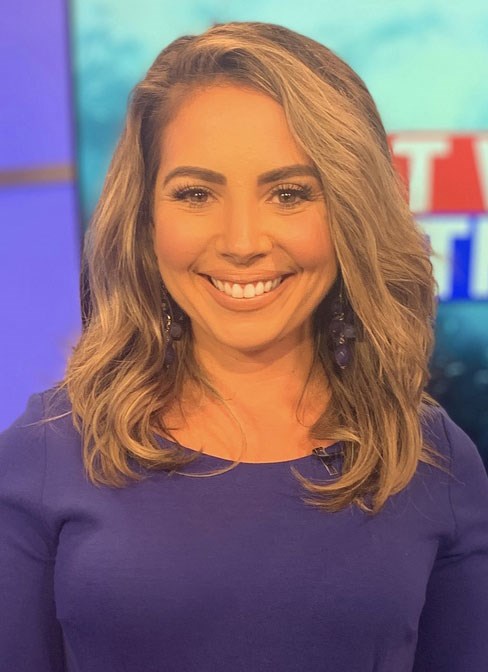 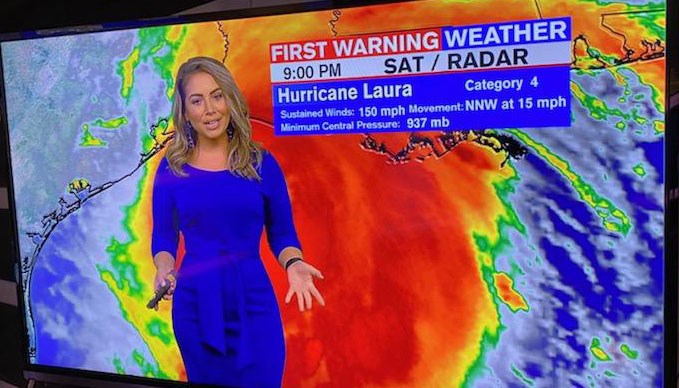 Lena Dziechowski came late to meteorology, after eight years working in retail and hospitality and studying business part-time at Northern Essex Community College.
But once she decided to pursue it, she made up for lost time, transferring into UMass Lowell as a sophomore majoring in atmospheric science. She earned bachelor’s and master’s degrees in four years.
Three months after graduating, Dziechowski landed her first television job as a freelance meteorologist at Western Mass News in Springfield, Massachusetts, which quickly turned into a full-time job.
She says she got the position largely thanks to the outside experiences she was encouraged to pursue while at UMass Lowell: a summer research internship with the National Weather Center, followed by a broadcast internship with the weather team at Channel 25 in Boston, which at the time included UML alumnae Shiri Spear ’07 and Sarah Wroblewski ’05. (Wroblewski now works for WBZ.)
“From the second I stepped into the newsroom, even though it was 3 o’clock in the morning, the energy was undeniable,” she says. “I loved it. I knew that this is where I want to be.”
She says she also stood out to Western Mass News because she went on for a master’s degree – television jobs generally require only a bachelor’s – and because she’s able to deliver a weather forecast in either Spanish or English. Dziechowski’s mother is Colombian, and she grew up bilingual.
“That real-world experience, being able to apply what you learned, and the variety of my experiences all helped me stand out,” she says.
So did the network of contacts she made through her internships. One of those contacts alerted her to the entry-level job at WGGB, so she was able to apply early.
She went live for her first broadcast over Labor Day weekend and is now the weekend meteorologist – and a multimedia journalist during the week.
Dziechowski credits her love for meteorology to her decision to jump on an opportunity: a last-minute opening in a study abroad class at Northern Essex. Prof. Marcy Yeager led the program in Ecuador, a focused field study of natural systems that included stays in the Amazon rainforest basin and the Andes Mountains.
Dziechowski says it was the most amazing experience of her life – and convinced her that she needed to switch from business to science. Unsure what she wanted to specialize in, she asked Yeager what other courses she taught, and took Introduction to Meteorology with her. She was hooked.
“I like the fact that although we’ve come such a long way in terms of understanding and predicting the weather, we still have a long way to go, so there’s so much room for growth – and it’s never boring or static,” she says.
Dziechowski went on to teach middle-schoolers about weather and climate at the College for Kids at Northern Essex, which Yeager runs. That, and her experience as a teaching assistant for Assoc. Teaching Prof. Lori Weeden, led her to start a new, weekly feature at Western Mass News: “Weather Wednesdays.”
Every week, she shows children and families how to do a science experiment at home, using low-cost materials. She hopes it will get more girls and children of color interested in science, technology, engineering and math (STEM).
“Part of what I love about science is my ability to share my passion with others and expose people to things that might seem scary at first,” she says. “I’m a minority female, so I’m always advocating for underrepresented groups. They often think that STEM is not reachable for them, so my goal is to present it in a way that is approachable and fun.
“I hope that if they see that I can do this, then they will realize that they can, too.”