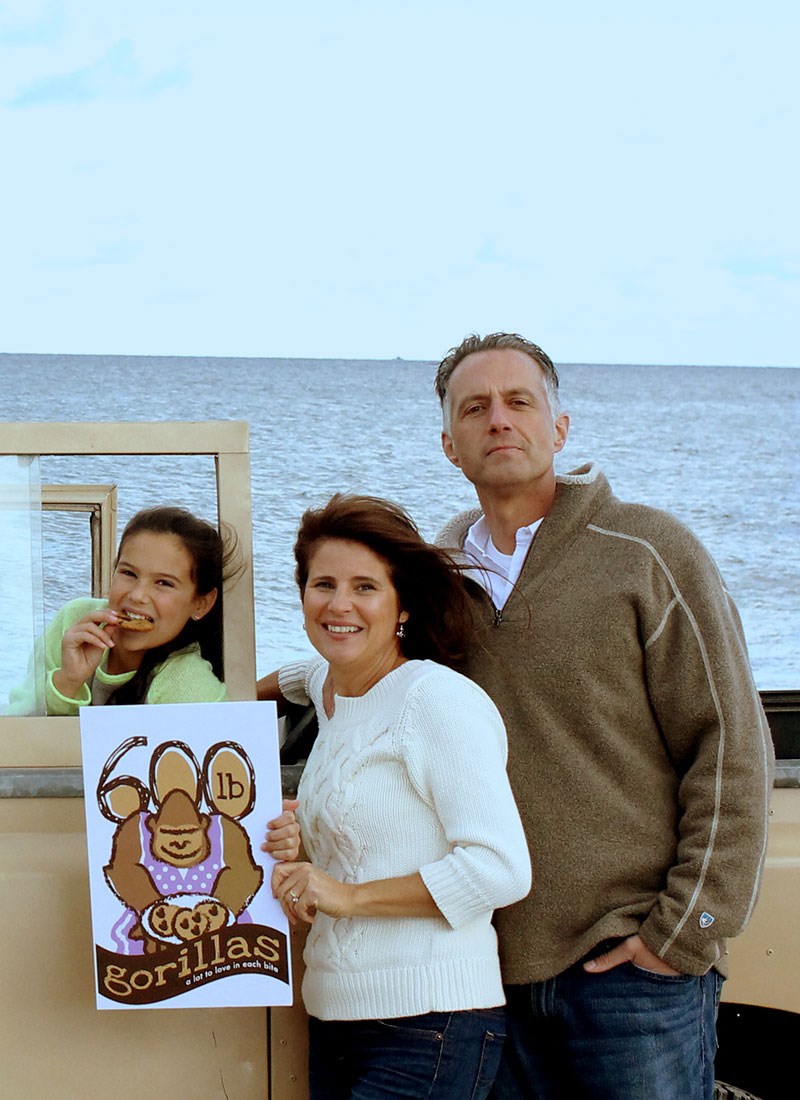 Chris '91 and Paula (Moriarty) White '91 were chatting, as they often did, about ideas for their own business. Paula said, “Hey, what about that cookie dough idea you mentioned? I mean how hard can it be? It’s just cookie dough.”
And 600 lb gorillas, Inc. was born.
The founders of what has become a multimillion dollar premium, all-natural cookie dough and ice cream sandwich company hold degrees in engineering: Paula in plastics engineering, Chris in civil engineering.
Paula Moriarty grew up in New Bedford: “I was the first in my family to go to college, so when the time came to choose a major, it was like, ‘Well, I’m strong in math and physics, and the guidance counselor says plastics engineering is a lucrative field, and ULowell has a program, so I’ll do that.’”
Chris, from Sutton, Mass., had an equally roundabout entrée to engineering by following his father’s directive to: “Check out ULowell or join the ROTC.”
Chris and Paula met, found love and succeeded in their respective engineering majors.
Just before graduation, Paula was offered a job with a medical devices company in California and wouldn't go unless Chris went, too.
The day after commencement, they flew across the country together, vowing to stay for five years. Both prospered at work—Chris was quickly hired by the California Department of Transportation—but the long hours, lousy commutes and 4 percent annual raises weren't doing it for them. They’d brainstorm at night ways to become their own bosses.
Paula and Chris married and returned to Massachusetts in five years, with Paula accepting a position with Boston Scientific and, later, Chris with the Big Dig. Then their first child, Mickey, arrived and it was time to take the plunge.
Paula and Chris agreed to pursue a company that created all-natural premium cookie dough. They were surprised at how much they relied on their engineering educations and experience. “College prepared us for our entrepreneurial venture more than we would have thought by providing real life experiences and lessons that went well beyond our scholastic learning,” says Chris.
“We absolutely used what we learned in college every step of the way,” says Paula “The math, logic, planning and analytical skills from engineering were invaluable,” says Paula, who also cites help from a required ULowell writing course when it came time to write a business plan.
They incorporated in 1999, and production began in a modified technology incubator a few doors down from their home. Their product was selling well but the good times were not rolling.
Fast forward to 2014, and things have improved for the Whites and their gorilla. They've weathered economic downturns, expanded their business and moved into their dream home near the water. Their products are now produced in New Jersey and Ohio and will be sold in Wal-Mart stores nationwide.
The Whites say the big risk was worth it. “We wouldn't change a thing,” says Chris.