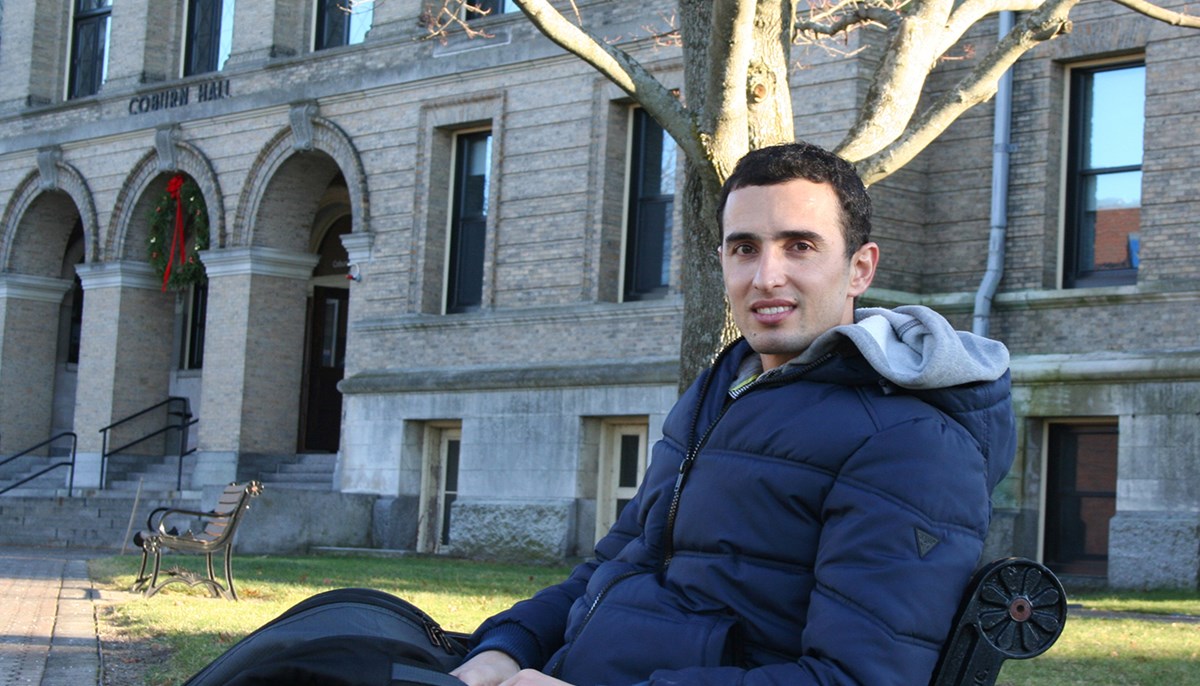 Everyone has their own reasons for attending grad school. To improve career prospects. To fulfill professional requirements. To scratch an intellectual itch.

For Burhan Colak, the reason was simple: The Turkish military told him to.

Born and raised in Mersin, a province on Turkey's southern Mediterranean coast, Colak was drawn to army life at an early age. He attended military high school before enrolling in the Turkish Military Academy, which he says is “similar to West Point.”

After graduating with a degree in business administration in 2005, Colak began his career as a Gendarmerie officer, a branch of the Turkish Armed Forces responsible for patrolling the country's rural areas. He rose to the rank of captain and took part in a NATO-led mission in Kosovo.

Then, in 2012, his marching orders took an unexpected 5,000-mile left turn to Lowell. The army chose Colak to become a military school instructor and arranged for him to get his Master of Arts in Community Social Psychology from the College of Fine Arts, Humanities & Social Sciences.

“I was very excited, of course. The U.S. culture is very popular around the world, so it was nice to see things firsthand,” says Colak, whose first impression of American life came while apartment hunting downtown on foot. “I didn't find any people to talk to. Everyone was driving. I knew that there is a lot of individualism here, still I was expecting there would be more communication. I was a little surprised by that.”

More than two years later, Colak's take on the city — and life in America — is much different. “Lowell has changed a lot, and I think UMass Lowell has a lot to do with that. It's becoming more pedestrian friendly, so I like this change,” says Colak, an avid runner who was world champion among high schoolers in the 1,500 meters in 1999.

“And what I like about American culture is that even if people don't like an idea, they can listen and they can talk (about it). In Turkey, people may cut off the conversation from the beginning. Here they try to understand you more. I like this part of supportive culture here.”

Colak is actively involved in helping other international students acclimate to life in the States, suggesting a holiday mentorship program; and developing a website for the 2015 DifferenceMaker Idea Challenge that would pair international and domestic students based on common interests to create cross-cultural social exchanges.

“We are living in a globalized world and students need to learn more about different cultures,” says Colak, who belongs to the Turkish Cultural Clubs and enjoys sharing his country's rich history with others.

Colak also keeps close tabs on what’s going on politically in Turkey, a country at the crossroads of the Middle East and Europe. “I'm really worried about the things going on now, both on the south of Turkey and on the north. I think a lot about those issues,” says Colak, who speaks with his family back home once a week.

“Personally, I don't like the idea of war and these kind of things. I wish we were living in a world where no military is needed. That's my dream. That's my wish. Unfortunately, maybe it's human nature, maybe we're always just fighting against each other. But still, military could be a very useful tool for the peace.”

Once he completes his degree in spring 2015, Colak will return to the Turkish Armed Forces and serve for at least another seven years — when he will be 38. He says he looks forward to teaching young soldiers the lessons he's learned at UMass Lowell.

“I learned a lot from being here in terms of talking, listening to people and understanding their point of view,” he says. “I can tell people there are some other ways for us to solve the problems. I think that will make some difference if I can share it with some other military people in Turkey."